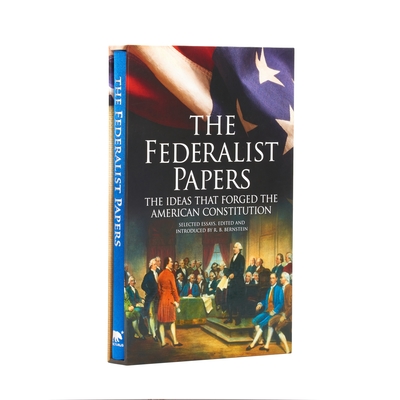 This luxury, silkbound treasury brings together a selection of the most influential essays from The Federalists Papers, presented in a handsome slip-case with silver foil stamping.

The Federalist was the most important American contribution to the literature of constitutional law-making, written by Founding Fathers Alexander Hamilton, James Madison and John Jay. These articles are hailed as one of the greatest products of the American Enlightenment, covering judiciary authority, legislative representation, the separation of powers and more. This beautiful slipcased edition features stunning full-color illustrations and is edited and introduced by constitutional historian R. B. Bernstein. Essays include:
- No. 10 - The Union as a Safeguard Against Domestic Faction and Insurrection by Madison
- No. 39 - The Conformity of the Plan to Republican Principles by Madison
- No. 51 - The Structure of the Government Must Furnish the Proper Checks and Balances Between the Different Departments by Madison
- No. 78 - The Judiciary Department by Hamilton
- No. 84 - Certain General and Miscellaneous Objections to the Constitution Considered and Answered by Hamilton This edition also includes John Jay's An Address to the People of the State of New York, a copy of the American Constitution as well as the Amendments, making it a brilliant reference guide to American constitutional history. Its deluxe presentation makes this book a wonderful gift or collectible for any history enthusiast. ABOUT THE SERIES: The Arcturus Silkbound Classics series brings together deluxe gift editions of literary classics, presented with luxurious silk binding, striking embossed cover designs and full-color illustrations.
R.B. Bernstein (editor) is a Distinguished Adjunct Professor of Law, New York Law School, Lecturer in Political Science, Colin Powell School for Civic and Global Leadership, City College of New York and author of Thomas Jefferson and The Founding Fathers Reconsidered (both for Oxford University Press). Alexander Hamilton (1755-1804) was an American statesman, politician and one of the Founding Fathers of the United States. He was a trusted member of President Washington's first cabinet and played a key role in defending and ratifying the U.S. Constitution. James Madison (1751-1836) was Americas fourth president, serving in office from 1809 to 1817. He wrote the first drafts of the U.S. Constitution and established the Democrat Republican Party alongside Thomas Jefferson. John Jay (1745-1829) was a Founding Father and Abolitionist. He helped negotiate the Treaty of Paris of 1783, which ended the American Revolution and won British recognition of American independence.