The Rise of Islamic State: ISIS and the New Sunni Revolution (Paperback) 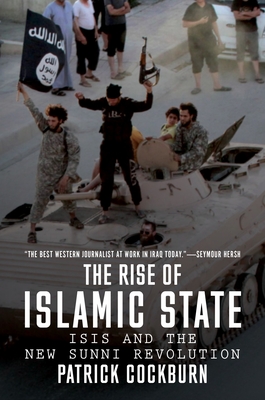 By Patrick Cockburn
$16.95
Available to Order - Usually Arrives in Our Store in 4 to 7 Days

The essential “on the ground” report on the fastest-growing new threat in the Middle East, from the winner of the 2014 Foreign Affairs Journalist of the Year Award

Born of the Iraqi and Syrian civil wars, the Islamic State astonished the world in 2014 by creating a powerful new force in the Middle East. By combining religious fanaticism and military prowess, the new self-declared caliphate poses a threat to the political status quo of the whole region.

In The Rise of Islamic State, Patrick Cockburn describes the conflicts behind a dramatic unraveling of US foreign policy. He shows how the West created the conditions for ISIS’s explosive success by stoking the war in Syria. The West—the US and NATO in particular—underestimated the militants’ potential until it was too late and failed to act against jihadi sponsors in Saudi Arabia, Turkey and Pakistan.

Patrick Cockburn is currently Middle East correspondent for the Independent and worked previously for the Financial Times. He has written three books on Iraq’s recent history, including The Occupation and Saddam Hussein: An American Obsession (with Andrew Cockburn) as well as a memoir, The Broken Boy and, with his son, a book on schizophrenia, Henry’s Demons, which was shortlisted for a Costa Award. He won the Martha Gellhorn Prize in 2005, the James Cameron Prize in 2006, the Orwell Prize for Journalism in 2009 and is the winner of the 2014 Foreign Affairs Journalist of The Year Award.

“Quite simply, the best Western journalist at work in Iraq today.”
—Seymour Hersh

“Amid the many books published on the current conflicts reshaping the Middle East, few are as informative or perceptive as The Rise of Islamic State.”
—Observer

“Patrick Cockburn has produced the first history of the rise of the Islamic State … No one is better equipped for this task … Indispensable.”
—Daily Telegraph

“Patrick Cockburn spotted the emergence of ISIS much earlier than anybody else and wrote about it with a depth of understanding that was just in a league of its own. Nobody else was writing that stuff at that time, and the judges wondered whether the Government should consider pensioning off the whole of MI6 and hiring Patrick Cockburn instead.”
—British Journalism Awards judges

“An invaluable history of IS along with a powerful critique of Western policy in Iraq and Syria and an unsparing analysis of Shia politics in Baghdad.”
—Hugh Roberts, London Review of Books

“His dispatches from Iraq are an exemplary untangling of the political and social complexity that lies behind one of the world’s great crises. He writes fairly, compassionately and clearly, with a steady and knowledgeable eye.”
—Orwell Prize judges

“The essential primer on the organization.”
—Vice

“Patrick Cockburn, of the London Independent, is one of the best informed on-the-ground journalists. He was almost always correct on Iraq.”
—Sidney Blumenthal, in an email to Hillary Clinton

“Has anyone covered this nightmare [in the Greater Middle East] better than the world’s least embedded reporter, Patrick Cockburn? Not for my money. He’s had the canniest, clearest-eyed view of developments in the region for years now.”
—Tom Engelhardt, TomDispatch