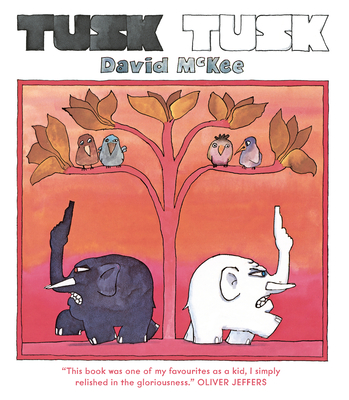 
Email or call for price. Handling fee may apply.
Once, elephants came in two colors: black or white. They loved all other creatures—but each set wanted to destroy the other. Peace-loving elephants ran and hid in the deepest jungle while battle commenced. The war-mongers succeeded: for a long time it seemed that there were no elephants in the world at all, not of any color. But then the descendants of the peace-loving ones emerged from the jungle, and by now they were all grey.

David McKee's most famous creation is Elmer the Patchwork Elephant which is now published in more than 40 languages.

"This book was one of my favourites as a kid, I simply relished in the gloriousness of a load of elephants battling it out in a bizarre forest. It wasn’t until I was a bit older that I recognised the importance of the morality that lay (not so subtly) underneath." - Oliver Jeffers -