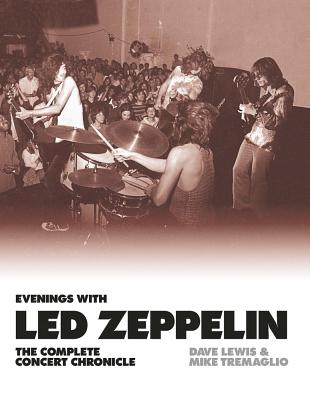 From their earliest gig in a Denmark school gymnasium on September 7, 1968, through to the last gig that Jimmy Page, Robert Plant, and John Paul Jones ever performed with John Bonham, in Berlin on July 7, 1980, this is the Led Zeppelin story told from where their legend was forged—live on stage. Deploying impeccable research spread over many years, Dave Lewis and Mike Tremaglio bring clarity, authority, and perspective to the band's unique story.

Dave Lewis first heard the music of Led Zeppelin in 1969 at the age of thirteen. The effect has been a lasting one. He is acknowledged and respected throughout the world as a leading chronicler of the group and its individual members. Dave is the editor and founder of the acclaimed Led Zeppelin magazine Tight But Loose. Established in 1978, it reaches out to Led Zeppelin fans in more than twenty countries. In 2015 Dave contributed the liner notes to the official Led Zeppelin release The Complete BBC Sessions. Dave has been lucky enough to attend fifteen Led Zeppelin concerts, various Jimmy Page and John Paul Jones gigs, and has witnessed Robert Plant perform live on more than one hundred occasions. Mike Tremaglio is one of the foremost Led Zeppelin researchers and has chronicled their work over many years in print and on the web. For many years, he wrote popular tour retrospectives for the highly regarded Tight But Loose magazine. He has also contributed significantly to several of co-author Dave Lewis's books and magazine features.