The Atlas of Disease: Mapping deadly epidemics and contagion from the plague to the zika virus (Hardcover) 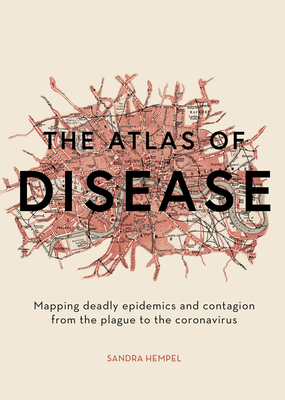 The Atlas of Disease: Mapping deadly epidemics and contagion from the plague to the zika virus (Hardcover)


Available to Order - Usually Arrives in Our Store in 4 to 7 Days
Behind every disease is a story, a complex narrative woven of multiple threads, from the natural history of the disease, to the tale of its discovery and its place in history. The Atlas of Disease is the first book to tell these stories in a new an innovative way, interweaving new maps with contemporary illustrations to chart some of the world's most deadly pandemics and epidemics.

In The Atlas of Disease, Sandra Hempel reveals how maps have uncovered insightful information about the history of disease, from the seventeenth century plague maps that revealed the radical idea that diseases might be carried and spread by humans, to cholera maps in the 1800s showing the disease was carried by water, right up to the AIDs epidemic in the 1980s, and the recent devastating ebola outbreak.

Crucially, The Atlas of Disease will also explore how cartographic techniques have been used to combat epidemics by revealing previously hidden patterns. These discoveries have changed the course of history, affected human evolution, stimulated advances in medicine and saved countless lives.

Sandra Hempel is an esteemed medical journalist who has written for many newspapers and journals, including The Times, The Guardian and The Lancet. Her previous books include The Medical Detective: John Snow, Cholera and the Mystery of the Broad Street Pump, which won the British Medical Association's prize for the public understanding of science, and The Inheritor's Powder: A Cautionary Tale of Poison, Betrayal and Greed, which was serialised on Radio 4 as Book of the Week.