Atlas of Improbable Places: A Journey to the World's Most Unusual Corners (Unexpected Atlases) (Paperback) 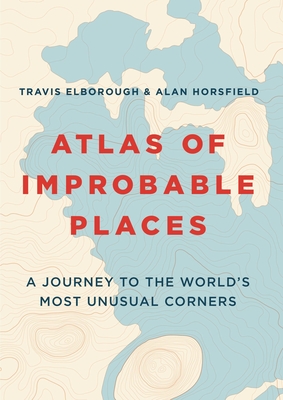 Atlas of Improbable Places: A Journey to the World's Most Unusual Corners (Unexpected Atlases) (Paperback)


Available to Order - Usually Arrives in Our Store in 4 to 7 Days
It is perhaps the eighth wonder of our world that despite modern mapping and satellite photography our planet continues to surprise us. Hidden lairs beneath layers of rock, forgotten cities rising out of deserted lands and even mankind's own feats of engineering eccentricity lie in the most unusual of destinations.
Travis Elborough goes in search of the obscure and bizarre, the beautiful and estranged. Taking in the defiant relics of ancient cities such as Ani, a once thriving metropolis lost to conquered lands, and the church tower of San Juan Parangaricuto, that miraculously stands as the sole survivor of a town sunk by lava. Through the labyrinths of Berlin and Beijing — underground realms dug for refuge, espionage and even, as Canada's Moose Jaw, used as the playground for gangsters trading liquor and money over cards. Never forgetting the freaks and wonders of nature's own unusual masterpieces: the magical underground river shaped like a dragon's mouth in the Philippines and the floating world of Palmerston. With beautiful maps and stunning photography illustrating each destination, Atlas of Improbable Places is a fascinating voyage to the world's most incredible destinations. As the Island of Dolls and the hauntingly titled Door to Hell — an inextinguishable fire pit - attest, mystery is never far away. The truths and myths behind their creation are as varied as the destinations themselves. Standing as symbols of worship, testaments to kingships or even the strange and wonderful traditions of old and new, these curious places are not just extraordinary sights but reflections on man's own relationship with the world around us.

Travis Elborough has been a freelance writer, author and cultural commentator for more than a decade now. His book include The Bus We Loved, a history of the Routemaster bus;The Long Player Goodbye, a hymn to vinyl records; and Wish You Were Here, a survey of the British beside the seaside. Elborough is a regular contributor to the Observer and the Guardian but has written for the Times, Sunday Times, New Statesman, the Oldie, TATE etc., BBC History magazine and Kinfolk among others and frequently appears on BBC Radio 4 and Five Live.

ALAN HORSFIELD has over thirty years' experience as a cartographer. Having started his career at the Ordnance Survey of Great Britain, he has created artwork for many publications, most recently as chief cartographer for Reader's Digest World Atlas. Alan lives in Hampshire with his wife and three children.