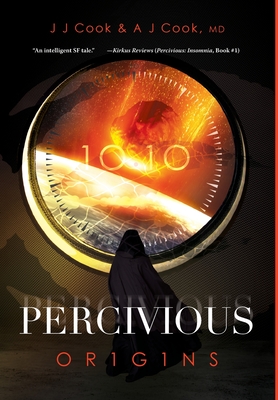 What if we've never actually been at the pinnacle of the evolutionary ladder?

As the pandemic of Percivious: Insomnia tightens its devastating grip on society, travel back in time and across space to uncover its secret . . .

The maverick second volume in the Percivious Trilogy, Percivious: Origins shatters history as we (think we) know it.

Two hundred and eighty million years before the origin of homo sapiens, an advanced species-the XYZ-are forced to flee as a five-hundred-kilometer-wide iron relic of the big bang hurtles toward Earth for its second act of complete annihilation.

As the starship HELIX departs from Earth's gravitational pull, horrified passengers watch as the once-aquamarine planet turns red with fire, burning beneath them. But as the XYZs adjust to life in space, Herriden, the first child born aboard the ship, represents hope during their voyage to a new home.

A species to whom human frailties like violence and greed are unknown, the XYZ live in abundance and value shared knowledge and emotional connection above all else. But after a failed attempt to inhabit a new planet, the HELIX is damaged and energy reserves are running low, and the XYZ may have no choice but to come back into the orbit of their ancestral home . . . setting into motion events for which there will be an unfathomable price to pay.

An epic, scientifically plausible journey through time and space from which the survival of an ancient hominid species and the fate of humankind are both left hanging in the balance, Percivious: Origins is a daringly original and captivating new kind of science fiction novel that will redefine what outer space sci-fi can be . . . and present an inspiring utopian vision of what's possible.