Ice Storm: The Rise and Fall of the Greatest Vancouver Canucks Team Ever (Paperback) 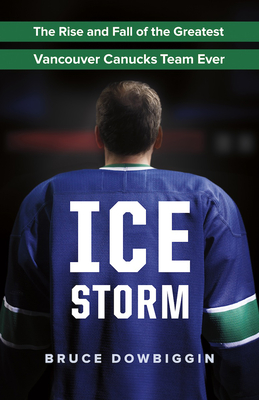 By Bruce Dowbiggin
$21.95
Special Request - May Not Be Available

In 2008, the Vancouver Canucks were Team Modern, revolutionizing the NHL under their new GM, former player agent Mike Gillis. Cool, calculating, and unsparing with the media, the onetime number one draft pick of the old Colorado Rockies swept away the tangled psychological past of the Canucks with bold innovation, remodeling Vancouver as a destination city for NHL star players. To do so, he built the Canucks from a non-playoff team in 2008 to the best in hockey from 2010-2012. He modernized the players' diets and psychological approach, he rebuilt the dressing room, and he sought sleep consultants to help with the Canucks' punishing travel schedule. More than that, his winning team lifted Vancouver from eighth overall in NHL revenues to second by 2013. When the team took to the ice for Game 7 of the 2011 Cup Final, it seemed there was nothing the Canucks couldn't overcome with their Canucktivity approach. The hockey world was at their feet. But things changed in Game 7. Physically exhausted and bullied by the Bruins, the Canucks succumbed 4-0. To cap the greatest season in team history, Vancouver rioted. Gillis tried a number of aggressive moves to get back to the Final, from switching Luongo for Schneider to trading players, but nothing worked. From there, the dominoes fell: Alain Vigneault was dismissed, John Tortorella hired; Tortorella raged, fans bayed for Gillis' head; and finally, Gillis and Tortorella were both fired. In spring 2014, tried-and-true Canuck hero Trevor Linden was installed as president, with former teammate Jim Benning by his side as GM. No one was quite sure if this was an improvement, but at least the hysterical screaming had stopped. How did it happen? Ice Storm follows the journey that led the Canucks from the top of the mountain to the bottom of the abyss in six short years.

Bruce Dowbiggin has covered hockey for the CBC, the Calgary Herald, and the Globe and Mail; and is the author of several bestselling hockey books, including Money Players, a finalist for the 2004 National Business Book Award. He has won two Gemini Awards for Excellence in sports broadcasting.