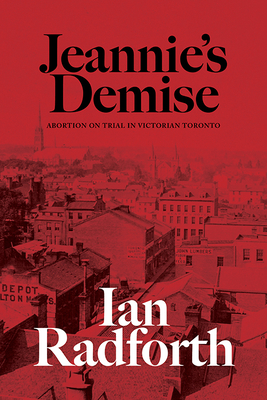 August 1, 1875, Toronto: The naked body of a young woman is discovered in a pine box, half-buried in a ditch along Bloor Street. So begins Jeannie's Demise, a real-life Victorian melodrama that played out in the bustling streets and courtrooms of Toronto the Good, cast with all the lurid stock characters of the genre. Historian Ian Radforth brings to life an era in which abortion was illegal, criminal proceedings were a spectator sport, and coded advertisements for back-alley procedures ran in the margins of newspapers.

At the centre of the story is the elusive and doomed Jeannie Gilmour, a minister's daughter whose independent spirit can only be glimpsed through secondhand accounts and courtroom reports. As rumours swirl about her final weeks and her abortionists stand trial for their lives, a riveted public grapples with questions of guilt and justice, innocence and intent. Radforth's intensive research grounds the tragedy of Jeannie's demise in sharp historical analysis, presenting over a dozen case studies of similar trials in Victorian-era Canada.