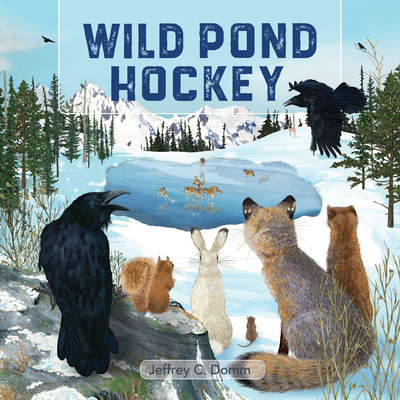 A vivid, fast-paced reimagining of the very first hockey game--played by wolves

Nobody knows for certain how hockey began. Was the first game played in Canada? Was it invented by Indigenous peoples, who then taught it to Europeans? Or, long ago, did a wolf pack find a new way to play?

When two ravens excitedly chisel away at a piece of ice on a frozen pond, a curious wolf pack approaches to investigate the ruckus. They step onto the slippery ice and scare off the birds. But the chunk of ice flies between the wolves, who soon start passing the puck back and forth. The game is on Playfully deking and diving with the ravens cheering them on, the wolves slip and slide in a game of wild pond hockey.

A fun re-imagining of the roots of our nation's favourite game with vibrant, photo-realistic artwork from veteran nature writer and artist Jeffrey Domm.

Jeffrey C. Domm is an award-winning illustrator with over thirty wildlife related books to his credit, including the children's books Atlantic Puffin and The Hatchling's Journey. He has been teaching illustration and drawing at NSCAD University for over sixteen years and his body of work includes illustrations for Parks Canada, Environment Canada, and Canadian Wildlife Service. He lives in Cow Bay, Nova Scotia.