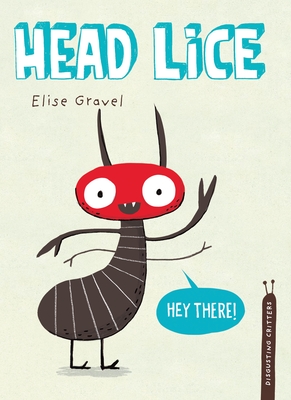 Part of a series of hilarious nonfiction books about disgusting creatures, this book examines head lice. It covers such topics as head lice habitats (human heads only, dogs are gross) anatomy (his body is slightly see through, so he can always see what he ate for lunch), and parenting practice (the female louse sticks eggs to human hair and uses the leftover glue for her model airplanes). Although silly and off-the-wall, Head Lice contains factual information that will both amuse and teach at the same time.
Elise Gravel is an award-winning author/illustrator from Quebec. She has won a Governor General's Award for Children's Illustration in French, and is well-known for her original, wacky picture books and graphic novels. After completing her studies in graphic design, Elise found herself quickly swept up into the glamorous world of illustration. Her old design habits drive her to work a little text here and there into her drawings and she loves to handle the design of her assignments from start to finish. She is inspired by social causes and likes projects that can handle a good dose of eccentricity.

“.... there’s a certain stigma that accompanies any outbreak of head lice that cannot be denied. Head Lice, written and illustrated by Elise Gravel, works to dismantle these presumptions, which makes it both a timely and important read. Gravel portrays head lice not as some Dickensian punishment against sloth but a simple bug transferred through contact, which multiplies quickly .... The whole thing is so cute .... [b]y the end of the book, even I saw head lice more as a tedious yet harmless annoyance, instead of some sort of plague visited upon bad parenting.” - Globe & Mail

“This series adds two more to its lineup of silly, whimsical facts. The cartoon illustrations and use of speech bubbles make for a winning mixture of entertainment and information. Bold colors and fonts draw attention to important words, which beginning readers will find useful. Humor abounds in both titles …. Ample spacing throughout makes for an effective layout. The comic charm will appeal to a wide berth of new and reluctant readers.”
— School Library Journal


“Gravel continues her Disgusting Critters series …. With …. [t]he entertaining formula established in previous titles—presenting absorbing facts in the main text while the animal in question delivers sassy and amusing asides in the art. The red and black fanged head louse is jocosely cheery for a parasite, and the factual info… is effectively punctuated by the accompanying illustrations …. the books are still solidly entertaining and funny, and the limited palettes (red, black, and turquoise for the head lice, and hot pink, chartreuse, and black for the spider) and wide-eyed, comical critters are attractive and inviting (well, as inviting as a head louse can be). Few nonfiction easy readers impart their information with such gleeful enthusiasm and kid appeal, and for that Gravel is to be commended.”
— The Bulletin of The Center for Children's Books

“This amusing and informative text investigates everything about head lice, including habitats (human heads only, dogs are gross); anatomy (their bodies are slightly see-through, so they can always see what they ate for lunch) and how they move (swinging from hair to hair like mini-Tarzans)! Factual and fun, this title is also available in French as Le pou.”
--Canadian Children’s Book Centre