The Annual Migration of Clouds (Paperback) 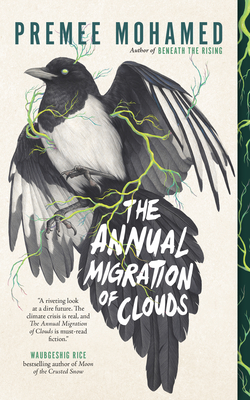 The Annual Migration of Clouds (Paperback)

"This packs a punch." -- Publishers Weekly

"One of the most unique and engaging voices in genre fiction." -- Booklist

"In this rich and nuanced universe, Mohamed offers an emotionally fierce and human story that takes the time and space to personalize apocalypse." -- STARRED review, Quill & Quire

A novella set in post-climate disaster Alberta; a woman infected with a mysterious parasite must choose whether to pursue a rare opportunity far from home or stay and help rebuild her community

The world is nothing like it once was: climate disasters have wracked the continent, causing food shortages, ending industry, and leaving little behind. Then came Cad, mysterious mind-altering fungi that invade the bodies of the now scattered citizenry. Reid, a young woman who carries this parasite, has been given a chance to get away -- to move to one of the last remnants of pre-disaster society -- but she can't bring herself to abandon her mother and the community that relies on her. When she's offered a coveted place on a dangerous and profitable mission, she jumps at the opportunity to set her family up for life, but how can Reid ask people to put their trust in her when she can't even trust her own mind?

With keen insight and biting prose, Premee Mohamed delivers a deeply personal tale in this post-apocalyptic hopepunk novella that reflects on the meaning of community and asks what we owe to those who have lifted us up.

Premee Mohamed is an Indo-Caribbean scientist and speculative fiction author based in Edmonton, Alberta. Her short fiction has appeared in a number of venues. Her debut novel, Beneath the Rising, is out now from Solaris Books, with the sequel A Broken Darkness due out in 2021.