Tales of a First-Round Nothing: My Life as an NHL Footnote (Paperback) 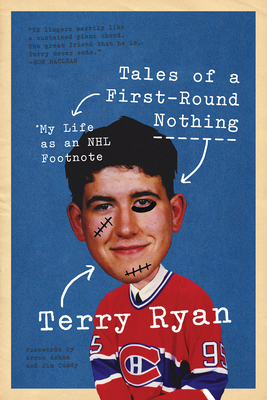 By Terry Ryan, Arron Asham (Foreword by), Jim Cuddy (Foreword by)
$19.95
Available to Order - Usually Arrives in Our Store in 4 to 7 Days

Terry Ryan was poised to take the hockey world by storm when he was selected eighth overall by the Montreal Canadiens in the 1995 NHL draft, their highest draft pick in a decade. Expected to go on to become a hockey star, Ryan played a total of eight NHL games for the Canadiens, scoring no goals and no assists: not exactly the career he, or anyone else, was expecting. Though Terry's NHL career wasn't long, he experienced a lot and has no shortage of hilarious and fascinating revelations about life in pro hockey on and off the ice. In Tales of a First-Round Nothing, he recounts fighting with Tie Domi, partying with rock stars, and everything in between. Ryan tells it like it is, detailing his rocky relationship with Michel Therrien, head coach of the Canadiens, and explaining what life is like for a man who was unprepared to have his career over so soon.

Terry Ryan played professional hockey for nearly a decade, and now plays in the Newfoundland Senior Hockey League. He currently works as a production assistant on the hit CBC show Republic of Doyle and lives in Portugal Cove, Newfoundland, with his wife and their two children. Arron Asham was drafted by the Montreal Canadiens in 1996 and has played more than 850 NHL games for the Habs, Islanders, Devils, Flyers, Penguins, and New York Rangers. Jim Cuddy is a singer, songwriter, and founding member of the internationally acclaimed Canadian band Blue Rodeo.