Truganini: Journey Through the Apocalypse (Paperback) 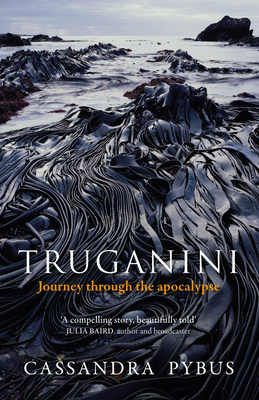 Truganini: Journey Through the Apocalypse (Paperback)


Email or call for price. Handling fee may apply.
Cassandra Pybus's ancestors told a story of an old Aboriginal woman who would wander across their farm on Bruny Island, in south-east Tasmania, in the 1850s and 1860s. As a child, Cassandra didn't know this woman was Truganini, and that Truganini was walking over the country of her clan, the Nuenonne. For nearly seven decades, Truganini lived through a psychological and cultural shift more extreme than we can imagine. But her life was much more than a regrettable tragedy. Now Cassandra has examined the original eyewitness accounts to write Truganini's extraordinary story in full. Hardly more than a child, Truganini managed to survive the devastation of the 1820s, when the clans of south-eastern Tasmania were all but extinguished. She spent five years on a journey around Tasmania, across rugged highlands and through barely penetrable forests, with George Augustus Robinson, the self-styled missionary who was collecting the survivors to send them into exile on Flinders Island. She has become an international icon for a monumental tragedy—the so-called extinction of the original people of Tasmania. Truganini's story is inspiring and haunting—a journey through the apocalypse.
Cassandra Pybus is an award-winning author and a distinguished historian. She is author of 12 books and has held research professorships at the University of Sydney, Georgetown University in Washington DC, the University of Texas and King's College London. She is descended from the colonist who received the largest free land grant on Truganini's traditional country of Bruny Island.
"A compelling story, beautifully told." —Julia Baird, author and broadcaster

"At last, a book to give Truganini the proper attention she deserves." —Gaye Sculthorpe, Curator of Oceania, The British Museum

"For the first time a biographer who treats her with the insight and empathy she deserves. The result is a book of unquestionable national importance." —Professor Henry Reynolds, University of Tasmania

"The book has an inevitable unhappy ending and is an important reminder of the continuing impact of racism and colonialism. However, Truganini’s life is worth more than its surrounding circumstances. Her words and thoughts are lost to us, but she was a human being whose story deserves to be told for its own sake. Truganini is a powerful biography set during the colonization of nineteenth-century Australia." —Foreword Reviews