The Grocer's Boy Gets Down to Business: The End Slice of His Career from the Easy-Going Seventies to the Ultra-Competitive Nineties (Paperback) 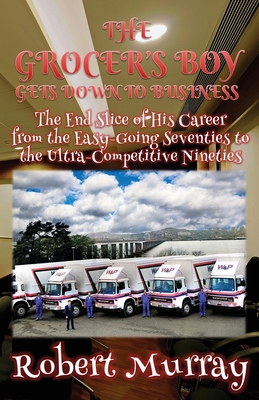 The Grocer's Boy Gets Down to Business: The End Slice of His Career from the Easy-Going Seventies to the Ultra-Competitive Nineties (Paperback)

What happens when a grocer's boy moves from the saddle of his delivery bike to an executive's chair? As the 1970s dawned, Robert Murray was on the way up - newly appointed to a senior role in one of Scotland's most respected grocery distribution businesses. However, fate would have more than a few surprises in store for the man who had worked his way up from humble beginnings in grocery delivery on rural Tayside to the top level of corporate decision-making.

But it wasn't all about the company boardroom; Robert's life was full of incidents and surprises during these unpredictable decades of his career, which saw his young family grow and new friendships forged. Time and again, he discovered that the importance of professional camaraderie was just as vital as meeting the needs of the increasingly-demanding consumer.

From the social and economic turbulence of the 1980s to the ruthless commercial competitiveness of the 1990s, Robert witnessed sweeping changes in the grocery world - a distributive trades revolution which was to transform the way companies did business in the UK and far beyond. Join him as he pedals on through thirty years in the grocery trade before parking up his old pushbike for the final time.