The Town that Said 'Hell, No!': Crested Butte Fights a Mine to Save its Soul (Paperback) 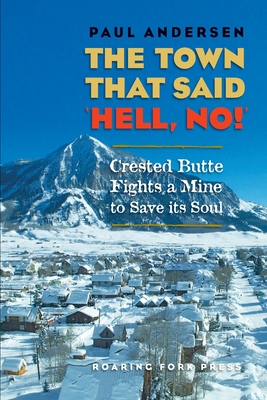 The Town that Said 'Hell, No!': Crested Butte Fights a Mine to Save its Soul (Paperback)

"The Town That Said, Hell No " is the story of a rural Colorado community under siege by AMAX, a huge international mining corporation. This powerful company was accustomed to getting its way, but it met its match in the late 1970s and early 1980s when it tried to overrun a unique and undaunted adversary.

Crested Butte was no ordinary town. Hemmed in by high mountains in the heart of the Central Rockies of Colorado, summers at 9,000 feet are idyllic, and snow covers the ground for eight months of the year. This small, remote town and the disparate and eccentric community it nurtured refused the dictates of Big Business and Big Brother when the town said a firm and resounding "NO "

A five-year pitched battle ensued where Crested Butte claimed its right to autonomy. The town stood up to the mining giant and defended its intimate sense of place, the vulnerable mountain environment in which the town is nestled, and the delicate balance of values that made the town unique and loved by its loyal townspeople.

This spontaneous, innovative ragtag army manned the front lines in a battle that changed the town and all of their lives. With courage, commitment, humor and derring-do, the town stood its ground for values that connected its struggle with the roots of liberty and the founding principles of democracy.

This is the story of Crested Butte, Colorado. It is also the story of rural America defending itself in the American West.