The Earth Beneath My Feet: A 7,000-Mile Walk of Discovery into the Heart of Wild Nature (Paperback) 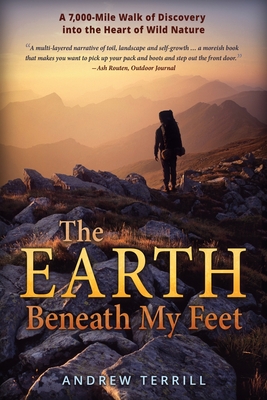 By Andrew Terrill
$19.95
Available to Order - Usually Arrives in Our Store in 4 to 7 Days

The Earth Beneath My Feet tells the extraordinary true story of a 7,000-mile solo walk. Hiking from Calabria in Italy to the top of Norway, Andrew Terrill reveals the wild side of Europe that most people miss. A compelling travel narrative about a challenging physical journey, The Earth Beneath My Feet also explores 'the journey within' - a passionate search for belonging within the natural world.

Like millions of people, Andrew Terrill grew up on the edge of a big city. But for Terrill, a young man in his early twenties, suburban life lacked purpose and meaning. What Terrill craved was a life of simplicity, freedom and adventure, and after surviving a near-fatal fall in the Swiss Alps, that was the life he chose.

In May 1997, despite lacking the funds, Terrill left his London home and travelled to the southernmost point of Calabria, Italy. Once there, he turned north and began walking. His destination, the North Cape at the top of Norway, lay unimaginably far away.

Leaving civilisation behind, and frequently even trails, Terrill journeyed deep into the 'other' Europe, the hidden wilderness Europe, a parallel continent that still exists beyond road's end. Travelling alone, he hiked the length of the Apennine mountain range - a forgotten side of Italy few outsiders ever know - continued across the Alps, through the forests of Central Europe, and then on towards the vast northern wildernesses of Arctic Norway. With every step, Terrill immersed himself in the natural world, seeking a deeper connection with it. The 18-month journey became a voyage of discovery, unveiling the secrets and treasures of Europe's least-known places. The miles brought hardships and struggles, pushed Terrill to his limits, but ultimately led to unimaginable rewards.

The Earth Beneath My Feet describes the first eight months of this epic walk. It takes readers the length of Italy during a searing-hot summer, and then across Austria into the depths of a fierce Alpine winter. The book introduces many of Europe's wildest and most beautiful locations - environments little touched by the modern world - as well as the colourful characters who live alongside the wild. It describes the full experience of travelling on foot through nature, and of living outside in all conditions. And it chronicles a journey of immense growth, of overcoming a sheltered upbringing and finding connection with something bigger and wilder.

The Earth Beneath My Feet is a narrative filled with freshness, optimism, wonder and youthful enthusiasm - an inspiring true story by a young man who chose to embrace life and live it to the full.

Featuring 80 evocative black and white photographs, and 8 maps, The Earth Beneath My Feet will satisfy anyone who feels the call of adventure, who has the urge to travel, who loves nature, and who feels a desire to live the life they know deep down they are meant to live.

The second half of this journey, told in On Sacred Ground, will follow on June 1 2022.