Repurposing the Past: How a Former Farm Boy and Marine Helped Give Bucks County a 21st-Century Facelift (Paperback) 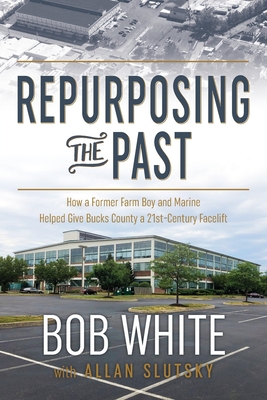 Repurposing the Past: How a Former Farm Boy and Marine Helped Give Bucks County a 21st-Century Facelift (Paperback)

By Bob White, Allan Slutsky (With)

The Cuban Missile Crisis? The assassination of JFK?

These are not the predictable topics you'd typically associate with a book that appears to be about cleaning up toxic, abandoned industrial sites, urban redevelopment, economic growth, and job creation. But if your name is Bob White, they're all part of an improbable journey from naive farm boy, to Cold War-era U.S. Marine, to the executive directorship of the Redevelopment Authority of the County of Bucks.

He's been referred to as "a beefy, fast-talking construction expert," a "larger-than-life visionary," "a superstar in economic development," and numerous other glowing accolades by Bucks County's press, politicians, and redevelopment and real estate industry executives.

There's good reason for that: During Bob White's tenure at the helm of Bucks County's Redevelopment Authority, more than 50 large-scale, transformative projects were completed and over 20,000 jobs were saved or generated in the process. Dozens of environmentally contaminated, blighted buildings-relics from the county's past glory years as a major East Coast manufacturing center-were replaced by beautiful parks, sparkling office complexes, research centers, upscale residential communities, new roadways, and a thriving deepwater port.

Repurposing the Past is HGTV on an industrial scale. In addition to Bob's unique and inspiring story, this new and unique book gives you a ringside seat to several dozen of his most significant, far-reaching projects. More than 80 photos provide a before and after look at each site, along with a narrative depicting its history, the environmental challenges and remediations involved, and the demolitions, budgets, grants, redevelopment plans, and community and political participation that helped Bucks County boldly step into the 21st century.

Whether you're a student or a professional in the fields of environmental sciences, economic development, and urban studies, or you're simply looking to read a unique, inspiring story, Repurposing the Past will prove to be a page turner.