Gourdvine Black and White: Slavery and the Kilby Families of the Virginia Piedmont (Hardcover) 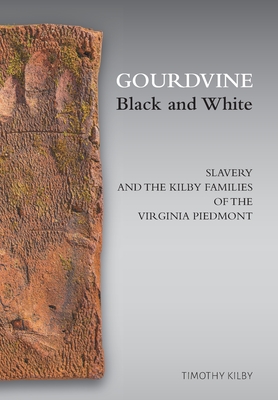 Gourdvine Black and White: Slavery and the Kilby Families of the Virginia Piedmont (Hardcover)

Gourdvine Black and White is the history, biography, and genealogy of one family divided into two by race and the time in which they lived. For four generations, European-descent Kilbys enslaved men, women, and children in Culpeper and Rappahannock counties of Virginia. Family history author Timothy Kilby took on the monumental task of researching and piecing together documentary fragments and DNA evidence to find individual identities and hidden realities.

Gourdvine is the factual account of three generations of African Americans beginning in the mid-1830s and continuing into the next century. First, there are Sarah and her daughter Juliet Ann, human beings who lived under the cloak of non-personhood, subject to the will of enslavers ready to rob their labor and deny them human identity. And then there are Juliet's children, Simon, John, James, daughter Sarah, and Bettie, the generation who would find freedom after emancipation and survive pervasive racial discrimination as adults.

This book's stories reveal the facts, events, and character of Kilbys, both Black and White, and attempt to return humanity to those altogether forgotten through time and prejudice.