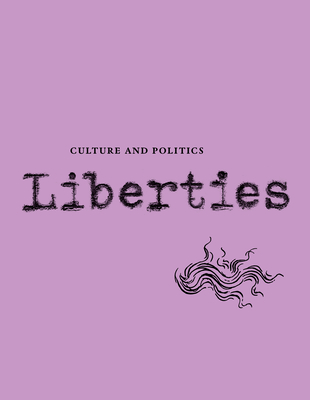 "A Meteor of Intelligent Substance"
"Something was Missing in our Culture, and Here It Is"
"Liberties is THE place to be."

Liberties, a journal of Culture and Politics, is essential reading for those engaged in the cultural and political issues and causes of our time.

Liberties features serious, independent, stylish, and controversial essays by significant writers throughout the world; new poetry; and, introduces the next generation of writers and voices to inspire and impact the intellectual and creative lifeblood of today's culture and politics.

In this edition of Liberties: Oksana Forostyna's A Diary from Lviv; Robert Kagan argues All Wars are Wars of Choice; Justin E. H. Smith grapples with The Gamification of Reality; James Wolcott questions The Poetry of Rock; Pascal Bruckner sees The Oblomovization of the West; William Deresiewicz on higher education's Schools for Souls; Jaroslaw Anders writes An Open Letter to an Enemy in My Native Land; Elliot Ackerman reveals The Politicization of the American Military; Jonathan Baskin on Sheila Heti and the Fight for Art; A Conversation About Modern History between Isaiah Berlin and Adam Michnik; David Thomson goes back to Chinatown with Roman Polanski and John Huston; Helen Vendler reads John Donne for How to Talk to God; Celeste Marcus on Why Women Mortify Themselves; Leon Wieseltier on Ukraine and Us; and, poetry from Valzhyna Mort, Daryna Gladun, Lesyk Panasiuk, Uri Tzvi Greenberg, Henri Cole, Claire Malroux, La Fontaine, and Devin Johnston.

Leon Wieseltier is the editor of Liberties.Celeste Marcus is the managing editor of Liberties.Oksana Forostyna is a Ukrainian writer and translator.Robert Kagan is the Stephen and Barbara Friedman Senior Fellow at the Brookings Institution, and the author most recently of The Jungle Grows Back: America and Our Imperiled World. Justin E. H. Smith is a professor of history and philosophy of science at the University of Paris, and the author among other books of The Internet Is Not What You Think It Is: A History, A Philosophy, A Warning. Daryna Gladum Ukrainian poet, translator, and performance artist. Her book of poems, To Hack a Tree, was published in Kyiv in 2017. Lesyk Panasiuk is a Ukrainian poet, translator, designer, and performance artist, and is the author of several books of poetry.Valzhyna Mort is a Belarusian-American poet. Her most recent book, Music for the Dead and Resurrected, recently was awarded the International Griffin Prize. Jaroslaw Anders is the author most recently of Between Fire and Sleep: Essays on Modern Polish Poetry and Prose.Elliot Ackerman's new book, The Fifth Act: America's End in Afghanistan, will be published this summer. James Wolcott is the author of Critical Mass: Four Decades of Essays, Reviews, Hand Grenades and Hurrahs. William Deresiewicz's new book The End of Solitude: Selected Essays on Culture will be published in August. Pascal Bruckner is a French writer and the author, among other books, of A Brief Eternity: The Philosophy of Longevity. Jennifer Gore is a translator in Washington, DC.Jean de La Fontaine, the author of The Fables, was born in 1621 and died in 1695. Henri Cole is an American poet and translator, and the author most recently of Blizzard: Poems. Claire Malroux is a French poet and translator and the author of Daybreak: New and Selected Poems translated by Marilyn Hacker.Jonathan Baskin is the Associate Director of the Creative Publishing and Critical Journalism program at the New School for Social Research, and a founding editor of The Point.Isaiah Berlin, the British philosopher, died in 1997. Adam Michnik is the founding editor of Gazeta Wyborcza in Warsaw and the author of many books. This conversation was translated by Joanna Trzeciak Huss.Uri Tzvi Greenberg, who was born in 1896 and died in 1981, was an Israeli writer and political figure, and one of the great Hebrew and Yiddish poets of the twentieth-century. David Thomson is the author of many books on film and culture, most recently Disaster Mon Amour. Helen Vendler is the A Kingsley Porter University Professor Emerita at Harvard University. Devin Johnston's most recent book of poems is Mosses and Lichens: Poems.