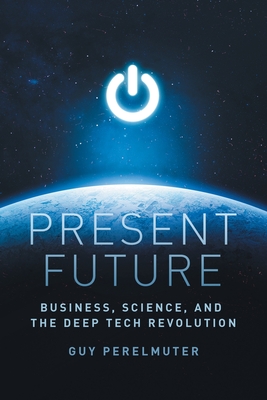 Learn from the past. Understand the present. Explore the future.

" . . . Present Future is a fascinating, expert look at the history of the key technological advances affecting life today, and preparation for the exponential leaps yet to come. . . . "

"With the context of an economic historian and the on-the-ground insights of an active technology investor, Perelmuter's Present Future brings readers to the bleeding edge of the science and technologies poised to revolutionize the 21st century. Comprehensive and yet enthralling, the book is a must-read for anyone who has an intellectual or commercial interest in what the future may hold."

". . . Perelmuter draws upon his own experiences as a successful tech entrepreneur and investor, and the writings of dozens of other experts, to highlight the most important implications of multiple emerging technologies. Recommended "

-BEN CASNOCHA, Co-Author of the #1 New York Times best seller The Start-up of You

"A comprehensive survey of action across the entire frontier of advanced technologies is daunting in concept and even more so in execution. Guy Perelmuter has pulled it off, providing an accessible yet historically informed review from the world of algorithms to the world of genomic analysis by way of just about every field of science in between. Most important: He avoids the hype-ridden cheerleading that all too often accompanies accounts of breakthrough innovation. . . "

-BILL JANEWAY, Venture Capitalist, Economist, Author of Doing Capitalism in The Innovation Economy: Reconfiguring the Three-Player Game Between Markets, Speculators and the State