In Her Own Footsteps: Flora Ross and Her Struggle for Identity and Independence in the Colonial West (Paperback) 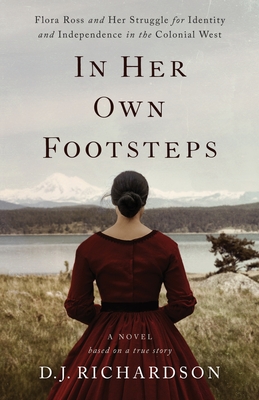 In Her Own Footsteps: Flora Ross and Her Struggle for Identity and Independence in the Colonial West (Paperback)

In the summer of 1859, British and American troops stood at the brink of war over a small island in the Pacific Northwest, each claiming sovereignty over the region in a military standoff that has become known as the "Pig War" of San Juan Island. In the midst of the dispute sat a Hudson's Bay Company farm, where seventeen year-old Flora Ross, the M tis daughter (Anishinaabe/Scottish) of a prominent company family, nursed a farmworker's dying wife. The American instigator of the military incursion, Paul K. Hubbs, Jr., courted Flora throughout the standoff, and they were married as the two nations announced a peaceful joint occupation agreement. Their marriage was celebrated in newspapers as a second joint occupation of the island. But the marriage didn't turn out to be peaceful, as Hubbs soon turned abusive and kept a mistress on a neighboring island. To escape, Flora had to overcome the lack of civil divorce laws in the colony of their marriage, the political power of her father-in-law in Washington Territory, and societal prejudices against a young M tis woman struggling to regain her independence and build a career as a nurse. In Her Own Footsteps is written in novel form, but tells the true story of Flora Amelia Ross-a pioneer in the B.C. healthcare industry-and her struggle for identity and independence, to the extent surviving documents permit. It is B.C. history told through the eyes of a young M tis woman caught between two communities, and caught between two nations.