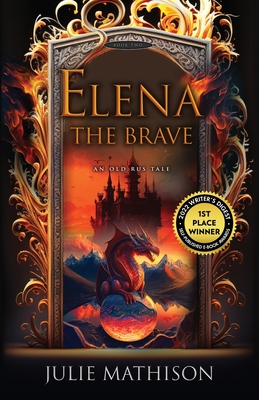 Bassed on Russian folk ballads recounting the exploits of Kiev's golden age, this young adult novel by award-winning author Julie Mathison transports the reader to Old Rus, a land of witches and ogres, bogatyr warriors and six-headed dragons, magic and myth. A land lurking below the waking world, a fabled land - except for the chosen few.

It's 1942, and the world is at war. Elena Petrovna Volkonsky is just a schoolgirl in a Pennsylvania steel town, the Russia of her forebears long forgotten - except in tales, sung by her babka in haunting tones. Elena can picture Old Rus clearly as she ponders her pet rock, its surface black and smooth, but its depths strange. Such visions The snow-swollen Dnepr, wending southward through the wild steppe all the way to Byzantium. Vladimir of the Bright sun, ruling from glorious Kiev . If only it were real. If only hers was not just an ordinary family in trying times. An ordinary family - with an extraordinary destiny.

Be careful what you wish for.

Meanwhile, Old Rus is in crisis. A dragon flies, a maiden is captured, and the great bogatyr, Dobrynya, is tasked with her rescue. But his son, Mitya, senses treachery on all sides. How can you save a man who will not save himself? And must he venture alone, trailing his father across the steppe where warring nomads range, even to the distant peaks of the Sorochinsk Mountains? He is prepared to do just that when a strange girl appears in the prince's stables and upends all his plans.

What happens when two worlds - and hearts - collide?