For Baka's Homeland: Eyewitness to the Birth of a State (Paperback) 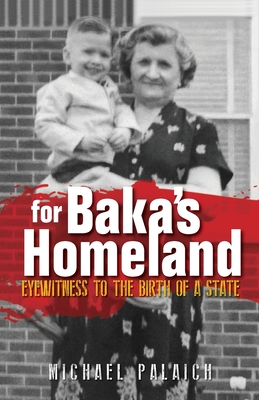 For Baka's Homeland: Eyewitness to the Birth of a State (Paperback)

﻿﻿FOR BAKA'S HOMELAND is a compelling eyewitness account of an American who was first recruited into the Croatian Liberation Movement at the age of twenty-five. The author's personal story details how the love for his Grandmother (Baka) led to his love for her people, her culture and ultimately to a desire to assist her homeland in realizing its centuries-old quest to achieve independence.

The author openly shares his personal journey from the sometimes-violent streets of Detroit to the war-torn streets of Croatia and Bosnia-Herzegovina.

After traveling acrosss four continents to produce a documentary on post-WWII Yugoslav war crimes, he created his own news agency, and became a Registered Foreign Agent for the Repubolic of Croatia during the country's War of Independence. Palaich was ultimately indicted by the US government for arms smuggling.

After more than two decades, Palaich finally reveals the full story, the historical people he met along the way and the unbelievable reason he is a free man today,