Confessions of a Helmet-Free Childhood: True-ish Tales of an Analog Upbringing (Hardcover) 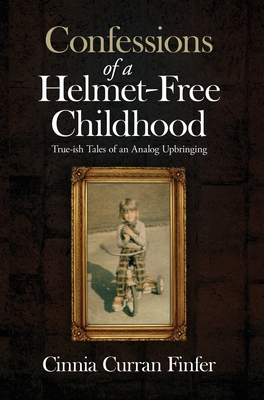 Confessions of a Helmet-Free Childhood: True-ish Tales of an Analog Upbringing (Hardcover)

Whether she's taking a face plant in a second-grade war, lying her way into pet ownership, setting the fondue kit on fire or taking the Fifth after an epic food fight, Confessions of a Helmet-Free Childhood chronicles Cinnia Curran Finfer finding her way through childhood by trial and error-heavy on the error. She wasn't trying to be funny; it just keeps turning out that way.

Born the second of four girls in New York City, Cinnia's childhood played out in five different grade schools and three different high schools in New York, Michigan, Minnesota, Ohio and Illinois. Being small for her age, far from athletic, and a perpetual new kid with an unusual name made for quite a ride. Like any kid, she made bad calls, big mistakes, and sometimes simply found herself in the wrong place at the wrong time.

Hey, a lot happens between "Go out and play" and "Be home before dark."