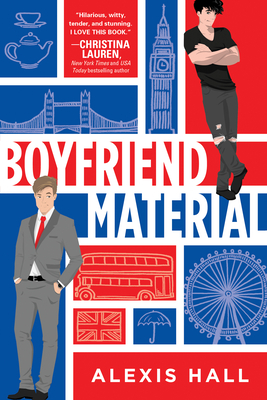 You know how it’s going to end by the time it starts yet you still read every page all the while routing for both of these slightly troubled but absolutely real characters. This is a lovely, sappy, sarcastic, thoroughly British queer rom-com romp.

"It's a fun, frothy quintessentially British romcom about a certified chaos demon and a stern brunch daddy with a heart of gold faking a relationship."—New York Times bestselling author Talia Hibbert

AMAZON BEST BOOK OF THE MONTH

Named a best book of the year by Oprah Magazine, Entertainment Weekly, Goodreads, The Washington Post, and more!

Practically perfect in every way

Luc O'Donnell is tangentially—and reluctantly—famous. His rock star parents split when he was young, and the father he's never met spent the next twenty years cruising in and out of rehab. Now that his dad's making a comeback, Luc's back in the public eye, and one compromising photo is enough to ruin everything.

To clean up his image, Luc has to find a nice, normal relationship...and Oliver Blackwood is as nice and normal as they come. He's a barrister, an ethical vegetarian, and he's never inspired a moment of scandal in his life. In other words: perfect boyfriend material. Unfortunately, apart from being gay, single, and really, really in need of a date for a big event, Luc and Oliver have nothing in common. So they strike a deal to be publicity-friendly (fake) boyfriends until the dust has settled. Then they can go their separate ways and pretend it never happened.

But the thing about fake-dating is that it can feel a lot like real-dating. And that's when you get used to someone. Start falling for them. Don't ever want to let them go.

USA Today bestselling author Alexis Hall writes books in the southeast of England, where he lives entirely on a diet of tea and Jaffa Cakes. You can find him at http://www.quicunquevult.com/, on Twitter @quicunquevult, and on Facebook at https://www.facebook.com/quicunquevult

"Boyfriend Material is the joyfully queer British romcom escape book I didn't know I needed. It's absurdly funny and swoonily romantic, with a sharp edge of wit and observation that keeps the story bounding along. An unbridled 'one-more-chapter-oh-no-it's-3am' delight." — KJ Charles

"How? How was this book written? My vote is witchcraft. What a study in character development. It's a how-to without even trying. I'm going to treat this novel like I do my favorite cardigan and buy 5 copies for when one wears out. Everyone needs to read this. Brilliance on every single page. Hilarious, witty, tender, and stunning. I LOVE THIS BOOK." — Christina Lauren, New York Times and USA Today bestselling author

"This is a triumph." — Publishers Weekly, STARRED Review

"Every once in a while you read a book that you want to SCREAM FROM ROOFTOPS about. I'm screaming, people!" — Sonali Dev, award-winning author of Pride, Prejudice and Other Flavors