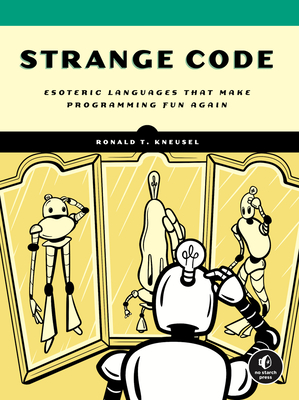 
On Our Shelves Now
Strengthen your overall coding skills by exploring the wonderful, wild, and often weird world of esoteric languages (esolangs).

Strange Code starts with a dive into the underlying history of programming, covering the early computer-science concepts, like Turing machines and Turing completeness, that led to the languages we use today. It then explores the realm of “atypical” programming languages, introducing you to the out-of-the-box thinking that comes from these unusual approaches to coding.

Later chapters address the even more unusual esolangs, nearly all of which are like nothing you’ve ever seen. Finally, author Ron Kneusel helps you develop and use two entirely new programming languages. You may not apply these languages in your day job, but this one-of-a-kind book will motivate you to think differently about what it means to express thought through code, while discovering the far-flung boundaries of programming.

Learning to think in these languages will make you a better, more confident programmer.
A programming language enthusiast, Ronald T. Kneusel’s experience with programming languages began circa 1980 when he first encountered an Apple II computer. Decades later, he completed a PhD in machine learning from the University of Colorado, Boulder, and now works in the industry developing deep learning systems. He is the author of Practical Deep Learning: A Python-Based Introduction (No Starch Press), Math for Deep Learning (No Starch Press), Numbers and Computers (Springer), and Random Numbers and Computers (Springer).
"A fascinating and thought-provoking tour through programming languages. Strange Code guides you through some mostly forgotten languages—such as Forth, SNOBOL, and CLIPS—before exploring more experimental languages—such as Piet—where your source code is an image. I particularly enjoyed Firefly, a language for the BBC micro:bit, created especially for the book."
—Sean McManus, Author of Mission Python: Code a Space Adventure Game!