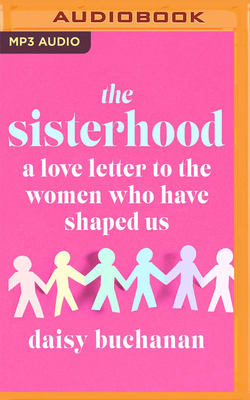 For fans of Bryony Gordon and Dolly Alderton, The Sisterhood is an honest and hilarious audiobook which celebrates the ways in which women connect with each other.

Imagine living between the pages of Pride and Prejudice, in the Bennett household. Now, imagine how the Bennett girls as they'd be in the 21st century - looking like the Kardashian sisters, but behaving like the Simpsons. This is the house Daisy Buchanan grew up in.

Daisy's memoir The Sisterhood explores what it's like to live as a modern woman by examining some examples close to home - her adored and infuriating sisters. There's Beth, the rebellious contrarian; Grace, the overachiever with a dark sense of humour; Livvy, the tough girl who secretly cries during adverts; Maddy, essentially Descartes with a beehive; and Dotty, the joker obsessed with RuPaul's Drag Race and bears.

In this tender, funny and unflinchingly honest account, Daisy examines her relationship with her sisters and what it's made up of - friendship, insecurity jokes, jealousy and above all, love - while celebrating the ways in which women connect with each other and finding the ways in which we're all sisters under the skin.