Gaming the Game: The Story Behind the NBA Betting Scandal and the Gambler Who Made It Happen (Paperback) 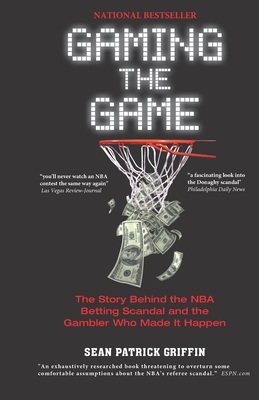 Gaming the Game: The Story Behind the NBA Betting Scandal and the Gambler Who Made It Happen (Paperback)


Available to Order - Usually Arrives in Our Store in 4 to 7 Days
In June 2007, the FBI informed the NBA that one of its referees, Tim Donaghy, was the subject of a probe into illegal gambling. Within months, the public knew the broad outlines of a scheme involving Donaghy betting on games he officiated with a co-conspirator, longtime Donaghy acquaintance and professional gambler Jimmy "Baba" Battista. They were joined in the scandal by a mutual childhood friend, Tommy Martino. By November 2008, each man had pleaded guilty to charges relating to the conspiracy, and was in federal prison. The story was over. Or so it seemed to be.Author Sean Patrick Griffin, Ph.D., a former Philadelphia Police officer turned university professor and best-selling author, conducted dozens of interviews and obtained betting records, referee statistics, court documents, and unique access to witness statements and confidential law enforcement files. Years of research are presented in GAMING THE GAME, which looks inside the FBI's investigation and beyond to provide the definitive account of the scandal. Jimmy Battista's remarkable decades-long bookmaking and betting career is examined, including and especially his role as architect of the widely publicized scandal. Battista, who - unlike his co-conspirators - never spoke with federal authorities, reveals for the first time the intricate details of the scheme, most of which only he knows.
Reviews
"impeccably researched...insightful... Griffin's] street-wise writing sounds anything but academic...After reading 'Gaming the Game, ' you'll never watch an NBA contest the same way again."Las Vegas Review-Journal
" Griffin] straddles the line between academic and storyteller, cop and journalist... Gaming the Game] will blow your mind." Philadelphia Magazine
"An exhaustively researched book threatening to overturn some comfortable assumptions about the NBA's referee scandal ... Gaming the Game] delivers the intrigue you'd expect from a true crime thriller" ESPN.com
"Offers a fascinating look into the Donaghy scandal ... intriguing" Philadelphia Daily News
"A book you can bet is worth reading...fascinating...a complete effort" Delaware County (PA) Daily Times
"a tremendous read...fascinating...gripping...a must read for any bettor serious about the global marketplace...by far the most believable account of the NBA betting scandal]" Covers.com
"An outstanding read that might make you change the way you view professional sports." Beyond the Bets
"If you've ever wondered what the REAL story was behind Tim Donaghy and the NBA betting scandal, this is a must read...If you're interested in sports betting, you won't be able to put Gaming the Game] down" Bettors World
"compelling and] many leveled...the research behind Gaming the Game is impressive... Griffin's] He's a fluid, crisp writer and an A-1 historian of crime" BNN
"Griffin's investigation into big time gambling is fascinating...Highly Recommended" Gambling Book and News
"Few people are as qualified as Griffin to write this book... his] scholarly background is evidenced in his research, which is flawless...If you've ever wanted to know how the big-money betting outfits work, this is the book for you. If you've ever wondered about the true story behind the Tim Donaghy scandal and how much of the truth are we being told, this is also the book for you. Griffin...is a gifted story teller and writes in a way that will have you glued to the pages. This is easily one of the best books ever written about the sports betting scene." About.com
"Griffin curates FBI files, interviews, statistics and court documents, providing a narrative so vigorous and complex that readers are practically courtside. The cast of characters...come to life like players in a true crime novel" Biographie
About the Author
A former Philadelphia Police officer, best-selling author Sean Patrick Griffin, Ph.D. is Professor and Department Head of Criminal Justice at The Ci.