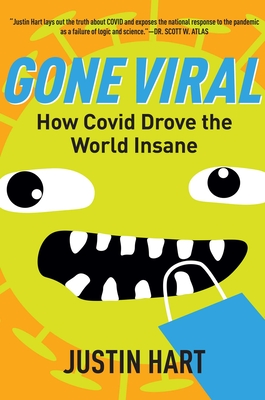 
Coming Soon - Available for Pre-Order Now
Data and marketing consultant and statistical sage to presidential candidates, governors, businesses, and the real powers-that-be, epidemiologists, Justin Hart catalogs in a terrifying-but-sprightly manner the folly and psychosis produced by the pandemic and diagnoses the societal destruction that the massive overresponse to the COVID virus has wreaked, as well as what can be done to stop the madness and bring the world back to a modicum of rationality.

Someone broke America. In this nightmare, neighbors have turned into agoraphobes, teachers fear their students, children are muzzled, citizens are censored, dystopian fictions have become reality, and unelected officials are creating a biometric police state. Oh wait. It’s not a nightmare. It’s our daily lives!

In truth, much of this insanity didn’t start with the coronavirus pandemic (it was already latent in big government and big corporations) and it won’t end there. COVID-19’s greatest threat turned out to be . . . mental. All we had to fear was fear itself—and boy did some of us fear! The very idea of the virus weakened the immune system of America and revealed a decaying underbelly of confusion, panic, unease, and cowardice few of the strong ones suspected existed. What a horrible wake-up call!

In a spate of anxious dread and gleeful power-grabbing, our health overlords threw away the pandemic response handbook and tried—beyond all reason—to protect, well, everyone. From massive over-testing to universal retail plexiglass to stay-at-home orders to stay-away-from-school orders to masking mandates to vaccine mandates to some of the worst restrictions on civil liberties in American history, this is an epic story that poses big questions about America’s future as a free society.

And the odd thing is, as Justin Hart shows, the actual disease was, as pandemics go, not that threatening; most people were at minimal risk. What is really scary is the total overreaction of half the country, many governments, that lost all sense of perspective. Hart offers a hopeful prescription on how we might face the madness down and claw our way back to sanity!
Justin Hart is an executive consultant with more than twenty-five years of experience with Fortune 500 companies and presidential campaigns. He’s also Chief Data Analyst and founder of RationalGround.com which helps companies, public officials, and even parents gauge the impact of COVID-19 across the country. In that capacity, he’s worked with everyone from Florida Governor Ron DeSantis to Dr. Scott Atlas to Dr. Jay Bhattacharya. Previously, Hart directed special projects on the Mitt Romney campaign. He’s appeared on Fox News, OAN, and Newsmax, has a raucous social media following, and hosts the lively and controversial substack Rational Ground. Hart is the father of eight and lives in San Diego with his wife Jennifer.