Fire in the Streets: How You Can Confidently Respond to Incendiary Cultural Topics (Hardcover) 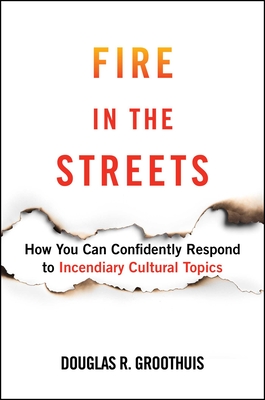 Fire in the Streets: How You Can Confidently Respond to Incendiary Cultural Topics (Hardcover)


On Our Shelves Now
From the origins of critical theory in the bowels of the academy to its use in justifying rioting and arson in the name of a dubious equity agenda, an eminent philosopher unmasks the intellectual origins of this mental virus, and details steps rational thinkers can take to combat its insidious spread.

What can we do amidst all the controversies over race and gender in society today? Do we have anything constructive to offer the world? As Jesus followers, we do, and this book shows the way.

A dangerous and revolutionary philosophy is responsible for the street fires in America. It fuels the actions of Black Lives Matter and Antifa. It invades curricula in public schools and in our military. It is in our churches. You have heard the phrase “white privilege,” the need for “safe spaces” on campuses, and perhaps the tongue-twister “intersectionality.”

Behind all of these is an ideology called critical theory, which is a form of cultural Marxism that divides society into the oppressed and the oppressors. It claims that America is “systemically racist” and founded on slavery. It believes that the voices of the minorities should trump the perspective of the dominant (and oppressing) culture. Unfortunately, this flawed perspective is overtaking our culture and infiltrating many of our churches.

In this book, we consider the importance of critical theory, explain its origins, question its aims, and subject it to a logical critique. Readers will:

A biblical alternative to matters of justice and politics is available. One that is right and true. One based on the ideals of the American founding. Find it in these pages.
Douglas Groothuis, Ph.D., is Professor of Philosophy at Denver Seminary, where he has served since 1993. He is the author or co-author of fourteen books, including the best-selling, Unmasking the New Age, the much-used apologetics textbook, Christian Apologetics, and introduction to philosophy, Philosophy in Seven Sentences, a memoir, Walking through Twilight, and a children’s book, I Love You to The Stars (with Crystal Bowman).

"First, they told us CRT was a white supremacist dog whistle. Then they said it was only taught in law schools. Now they tell us CRT in schools is a necessary component of teaching America’s true history. Fire in the Streets pulls back the veil and exposes CRT for what it is. More importantly, Doug Groothuis helps us see CRT’s threat not only to the Gospel but also to the very fabric of American culture. This timely book is winsome, honest, thorough, and fearless. Groothuis has made an invaluable contribution to the current cultural debate." -Voddie Baucham, dean of Theological Education at African Christian University in Lusaka, Zambia, and bestselling author of Fault Lines: The Social Justice Movement and Evangelicalism’s Looming Catastrophe

"Fire in the Streets is a timely and eye-opening book. Groothuis offers a biblical and philosophical critique of Critical Race Theory that Christians—whether they agree with his assessment or not— need to take seriously. This book deserves to be read, analyzed, and discussed widely." -Sean McDowell, professor of apologetics at Biola University, speaker, and author

“For all who know that shallow thinking will win no arguments, and witty put-downs and hard-hitting one-liners will change no minds, Groothuis has given us a deep dive into the ideas behind the radical left. Clear, comprehensive, and cogent, Fire in the Streets is for all who care about the American experiment and who wish to respond to the present crisis constructively.” -Os Guinness, author of The Magna Carta of Humanity

“In this wise and winsome book, Doug Groothuis gives us a brief history and summary of Critical Race Theory, a response to its accusations, a defense of America that recognizes both its genuine failings and the essential goodness of its ideals, and a way forward in our highly polarized times. This is a book that should be read by all who are concerned about the direction America is going or who want a well-documented summary and assessment of CRT.” -Glenn Sunshine, professor emeritus of history at Central Connecticut State University and author of Slaying Leviathan

"My good friend Douglas Groothuis is a person of rigorous intellectual depth, integrity, and character forged on the anvil of suffering and Christlike courage to speak truth when it is not popular to do so. Fire in the Streets brings all these things together. The result is a careful, intellectually informed, heartfelt, and bold treatment of a range of social, ethical, and political topics that constitute today’s chaotic culture. When you read this book, be prepared for hardhitting straight talk backed up with carefully crafted arguments. If you don’t agree with his claims, then provide reasons why he is wrong." -J. P. Moreland, professor of philosophy at Biola University and contributor to Dissident Philosophers: Voices against the Political Current of the Academy

"What are Christians to do in our present American age? Too many Christians are not equipped by their churches to properly engage the most pressing issues of our time. How does the Bible guide us in the public square? Dr. Doug Groothuis brilliantly explores these issues with a foundation on Christ’s mandate to serve each other with the love of God. Grace and Truth are critical for America to continue. This is must-read for every Christian." -Jeff Hunt, director of Centennial Institute at Colorado Christian University

"Fire in the Streets is wise Christian counsel to Americans who are concerned about the rise of Critical Race Theory and its equally destructive kindred ideologies. CRT, the fire that is currently burning in our streets, has been subject to many other critiques, but Groothuis brings something new to the table. He seeks to fight that destructive cultural fire with the ‘good fire’ of ‘well-reasoned, knowledgeable, and humble conviction that the American creed is worth reaffirming and living.’ His argument is meticulous, respectful, and frequently eloquent." -Peter W. Wood, president of the National Association of Scholars and author of 1620: A Critical Response to the 1619 Project