The Dumbest Generation Grows Up: From Stupefied Youth to Dangerous Adults (Hardcover) 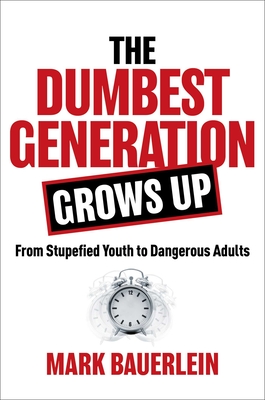 The Dumbest Generation Grows Up: From Stupefied Youth to Dangerous Adults (Hardcover)

Back in 2008, Mark Bauerlein was a voice crying in the wilderness. As experts greeted the new generation of “Digital Natives” with extravagant hopes for their high-tech future, he pegged them as the “Dumbest Generation.”

Today, their future doesn’t look so bright, and their present is pretty grim. The twenty-somethings who spent their childhoods staring into a screen are lonely and purposeless, unfulfilled at work and at home. Many of them are even suicidal. The Dumbest Generation Grows Up is an urgently needed update on the Millennials, explaining their not-so-quiet desperation and, more important, the threat that their ignorance poses to the rest of us. Lacking skills, knowledge, religion, and a cultural frame of reference, Millennials are anxiously looking for something to fill the void. Their mentors have failed them. Unfortunately, they have turned to politics to plug the hole in their souls.

Knowing nothing about history, they are convinced that it is merely a catalogue of oppression, inequality, and hatred. Why, they wonder, has the human race not ended all this injustice before now? And from the depths of their ignorance rises the answer: Because they are the first ones to care! All that is needed is to tear down our inherited civilization and replace it with their utopian aspirations. For a generation unacquainted with the constraints of human nature, anything seems possible.

Having diagnosed the malady before most people realized the patient was sick, Mark Bauerlein surveys the psychological and social wreckage and warns that we cannot afford to do this to another generation.
Mark Bauerlein is a professor emeritus of English at Emory University and an editor at First Things, where he hosts a podcast twice a week. He is the author of five books, including The Dumbest Generation: How the Digital Age Stupefies Young Americans and Jeopardizes Our Future (Or, Don’t Trust Anyone under 30). His commentaries and reviews have appeared in publications including the Wall Street Journal, the Washington Post, and the New York Times.