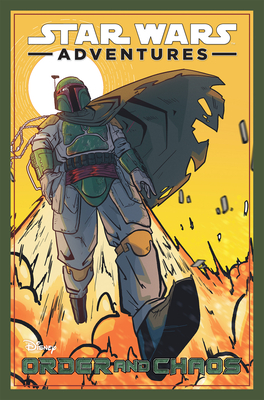 
Unavailable
Not Yet Published
Brand-new middle-grade stories featuring all your favorite characters from the far reaches of the Star Wars galaxy, spanning the entire Skywalker Saga and beyond!

To be a Jedi is to project peace and embody order in the face of conflict and chaos. But there's no conflict like the conflict between siblings—and Luke and Leia don't even know that's what they are! Can they keep their cool in a feverish fray in Bogano's swamplands?

Mace Windu is a Master of the Jedi Order, but even he can be ruffled, when an entire planet goes dark, leading Mace and the clones of Lightning Squad to a ghostly encounter! Then, it's Luke's turn to convey the lessons of the Jedi mindset, but is Rogue Squadron's hotheaded new recruit ready to learn?

All this, plus six stories of villainy that put the Dark side in the spotlight! Boba Fett tangles with Han Solo, Count Dooku has a new scheme, the Crimson Corsair proves himself a hotshot pirate, and more!

Collects Star Wars Adventures (2020) issues #7-12.
Sam Maggs is a bestselling author of books, comics, and video games. She's been a senior games writer, including work on Marvel's Spider-Man; the author of many YA and middle-grade books like The Unstoppable Wasp, Con Quest!, Tell No Tales, and The Fangirl's Guide to the Galaxy; and a comics writer for beloved titles like Marvel Action: Captain Marvel, My Little Pony, and Transformers. She is also an on-air host for networks like Nerdist. A Canadian in Los Angeles, she misses Coffee Crisp and bagged milk.

Michael Moreci is a writer of novels and comic books. His comics include the critically acclaimed Roche Limit and the military horror drama Burning Fields. He's written Suicide Squad for DC, Planet of the Apes for Boom!, and Star Wars Adventures for IDW. Other original titles include Curse, Hoax Hunters, ReincarNATE, and Black Hole Repo. As a novelist, he's the author of the espionage thriller Spy Swap. He lives with his wife, two sons, and dog.

Cavan Scott is a writer whose credits include novels, comic books, children's activity books, audio plays, and short stories. He has worked on a large number of high-profile comic series including Doctor Who, Star Wars, Pacific Rim, Skylanders, Adventure Time, Pathfinder, Angry Birds, Judge Dredd, and Warhammer 40,000. His second Sherlock Holmes novel, Cry of the Innocents, was published in 2017.