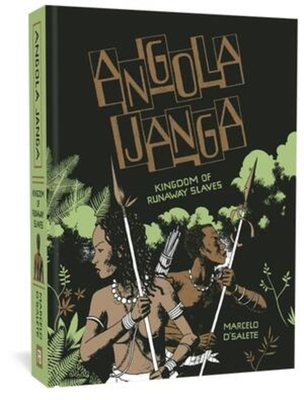 An acclaimed cartoonist tells the harrowing, life-affirming history of a Brazilian slave state.

An independent kingdom of runaway slaves founded in the late 16th century, Angola Janga was a beacon of freedom in a land plagued with oppression. In stark black ink and chiaroscuro panel compositions, D’Salete brings history to life; the painful stories of fugitive slaves on the run, the brutal raids by Portuguese colonists, and the tense power struggles within this precarious kingdom. At turns heartbreaking and empowering, Angola Janga sheds light on a long-overlooked moment of resistance against oppression.

Brazilian cartoonist Marcelo D’Salete is a graduate of the University of Sao Paulo with a degree in fine arts. He is an acclaimed illustrator, teacher, and historical author who lives in Italy.
In striking black-and-white illustrations using a variety of pens and brushes, [D'Salete] tells deeply unsettling stories about the institution [of slavery]'s brutality in his country.
— NPR

D'Salete fleshes out an important episode of Black resistance to slavery in the heart of the Amazon in this galloping 424-page graphic novel.
— The Daily Star

The energy of D'Salete's images—the angled perspectives, the chiseled details, the abrupt close-ups, the streaked strokes of his shading—are a match for his equally powerful subject matter.
— PopMatters

A powerful work, and absolutely beautiful to boot.
— Gosh Comics