The Black West: A Documentary and Pictorial History of the African American Role in the Westward Expansion of the United States (Paperback) 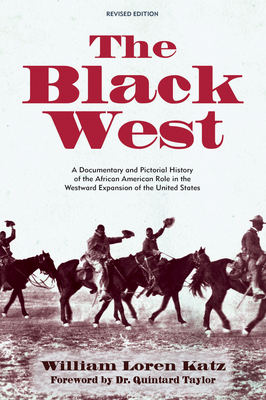 The Black West: A Documentary and Pictorial History of the African American Role in the Westward Expansion of the United States (Paperback)


On Our Shelves Now
This entirely new edition of a famous classic has glorious new photographs—many never before seen—as well as revised and expanded text that deepens our understanding of the vital role played by African American men and women on America's early frontiers. This revised volume includes an exciting new chapter on the Civil War and the experiences of African Americans on the western frontier. Among its fascinating accounts are those explaining how thousands of enslaved people in Arkansas, Missouri and Texas successfully escaped into the neighboring Indian Territory in Oklahoma. These runaways inspired the idea eventually adopted as the Emancipation Proclamation, which freed slaves within the states that were in rebellion. Inspired by a conversation that William Loren Katz had with Langston Hughes, The Black West presents long-neglected stories of daring pioneers like Nat Love, a.k.a. Deadwood Dick; Mary Fields, a.k.a. Stagecoach Mary; Cranford Goldsby, a.k.a. Cherokee Bill—and a host of other intrepid men and women who marched into the wilderness alongside Chief Osceola, Billy the Kid, and Geronimo.
William Loren Katz, author of 40 books, including award-winning titles such as Breaking the Chains, and Black Women of the Old West, has been a Scholar in Residence at Teachers College, Columbia University, and served as a consultant to the Smithsonian Institution and to school systems from California to Florida and England.

“Katz’s pioneering volume covers every phase of African-American life out West, from fur trading and homesteading to serving as scouts, guides and explorers to the military campaigns of the Buffalo Soldiers. First published in 1971 and now in its fifth edition, The Black West has an improved photo archive, offering more rare shots of black riders, ropers, cavalry members and ranchers, and includes a fresh section on black women on the last frontier…The Black West provides new information for those fooled by John Wayne films and TV shows like “Gunsmoke” into thinking only whites wielded six-guns and broke broncos.” — America’s Book Review

“Bill Katz is one of the few members outside of our community who has made a significant, lasting contribution to it." — John Henrik Clarke

“‘No phase of our national heritage has been portrayed . . . as more typically American than the old West,’ Katz writes, ‘yet this particular slice of Americana has consistently been pictured as lily-white.’ The indefatigable author of more than three-score books about American history, more than a dozen of which treat African American history, Katz sets the record straight in this revised and expanded version of his 1971 edition. The book opens with a brief treatment of the early African presence in the New World and closes with equal brevity in the 1890s as the frontier closes. The substantial middle is peopled by African American pioneers-trappers, mountain men, cowhands, settlers, soldiers, miners, mail-order brides, con men, entrepreneurs and politicians moving west to Colorado, California and all points between. Vignettes about individuals enliven the easy-reading narrative, among them the well-known Dred Scott; Mifflin Gibbs, the nation’s first African American judge; the adventurous Cathay Williams, who, masquerading as a man, served in the infantry; and the notorious Rufus Buck Gang that ‘took more lives than the infamous Dalton and Starr gangs combined.’ Katz’s ample inclusion of women is particularly noteworthy, as are the illustrations (on nearly every page) that add to the comprehensiveness of the text.” — Publishers Weekly

“Bill and I have enjoyed a friendship for many years, but we have been so consumed by the volume and uniqueness of our work, that for a while it seemed as though we had met in an earlier life. And maybe we did, for we have been brothers, in the true sense of the word, during most of my important years here in the United States. We, as scholars, have shared visuals, documents, stimulating discussions, and a complex, misunderstood and colorful sense of history, unparalleled by most historians. “Our missions were the same — to break the barriers of miseducation and isolation that has characterized the African American’s experience on this soil, before and after the arrival of Christopher Columbus.” — Dr. Ivan Van Sertima

“. . . an excellent reference for anyone interested in learning about the lives of African Americans & the role they played in the western expansion.” — Buffalo Soldiers Research Museum


“Seeks to break the shackles of conventional American historical categories” — Howard Dodson, former director of the Schomburg Center for Research in Black Culture