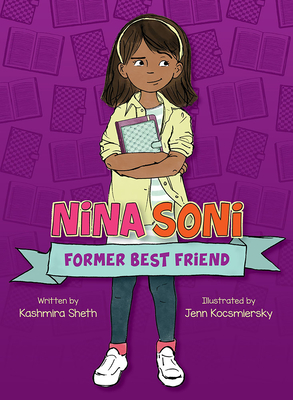 This is book number 1 in the Nina Soni series.

Nina Soni is a lovable, distractible Indian American girl with big plans and cast of family and friends to help her make her realize her dreams—or resolve the chaos that often results.
Nina tried as hard as she could but still somehow forgot about her school project. Fortunately, a class lesson about Alexander Fleming suggests how she might make a great discovery—and thus a great project! But with little sister Kavita's birthday party right around the corner, and her longtime friendship with Jay on the rocks, Nina has a lot to keep track of.
Middle grade readers are sure to relate to author Nina Soni and her entertaining efforts to manage her life with lists, definitions, and real-life math problems. Perfect for STEAM enthusiasts.
Kashmira Sheth was born in India with Guajarati as her mother tongue and began learning English in fifth grade. She had lived in Bhavnagar and Mumbai before moving to United States when she was seventeen to attend Iowa State University, where she received a BS in microbiology. Before becoming an author Kashmira had many different jobs, including running a dance school and choreographing and performing Indian dances, working in a bakery, and working as a food microbiologist. She is the author of several picture books, chapter books, and middle grade and young adult novels. Taking inspiration from her own life and experiences, much of Kashmira's work centers on Indian culture and features Indian and Indian American characters.

Jenn Kocsmierksy is a watercolor artist and picture book illustrator. She was adopted from Seoul, South Korea, and grew up in rural New Hampshire. Now, as a mom and artist, Jenn hopes to promote relatable childhood experiences featuring diverse characters. She was the recipient of the 2018 We Need Diverse Books Mentorship for Illustration and the 2016–2017 Walter Dean Meyers Grant. She lives in New York with her two children and a ginormous goldfish named Joey.

"Sheth's language is poetic in its simplicity, and her narratorial voice is a pleasure to read. . . . A sweet and entertaining series opener about family and friendship." —Kirkus Reviews

"Attractive illustrations and the use of dialogue, lists, and definition boxes (showing terms as defined by Nina) within the narrative make this chapter book accessible to somewhat younger readers than most middle-grade fiction. Science will evidently be an ongoing theme in the new Nina Soni series, which features a flawed but refreshing and very likable protagonist as well as well-drawn home and school settings. A promising start for the series." —Booklist

"The illustrations are realistic, detailed, and eye-catching, and the characters are easy to relate to and likable. The fonts and layout used are fairly dyslexic- and reluctant reader–friendly. The notebook-style lists and vocabulary definitions add to the book without overwhelming the action.. . . A simple but engaging story. A perfect fit for readers who enjoy realistic fiction about friendship and self-discovery." —School Library Journal