The Magnificent Book of Dragons (Hardcover) 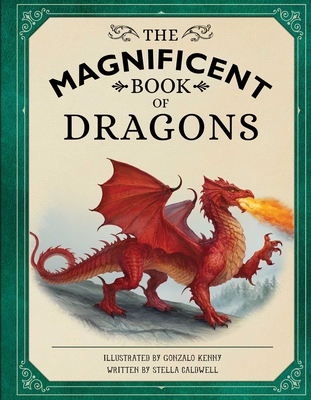 The Magnificent Book of Dragons (Hardcover)


Warehouse Out of Stock
This beautifully illustrated series will have you captivated. Stunning illustrations, intriguing facts, and a large format make an engaging reference to revisit time and again.

This magical menagerie will lead you on a thrilling journey through the fantastical realm of dragons. Meet fire-breathing monsters, ferocious serpents, wise and gentle giants, and multi-headed beasts.

From the hundred-headed Typhon of Ancient Greek mythology to the dazzling Aztec dragon Quetzalcoatl, all sorts of magnificent beasts are brought to life from across the globe and many different cultures.

Fascinating facts accompany each illustration so you can find out which dragon darted from tree to tree, how Shenlong was master of the rain and wind, and which creature could hypnotize people with its blazing eyes.
Stella A. Caldwell has written more than 20 books for children covering everything from mythical beasts and legends to the ancient Egyptians, pirates, and medieval knights. She studied English literature at the University of Edinburgh and spent many years working in children's publishing as an editor before writing her first book, a field guide to dragons called Dragonworld.

Gonzalo Kenny has a fascination for science fiction, horror, and fantastic universes. His illustrations of fantasy art and conceptual design are published in board games, videogames, trading cards, and in the entertainment and film industry.