The Caesar of Paris: Napoleon Bonaparte, Rome, and the Artistic Obsession that Shaped an Empire (Hardcover) 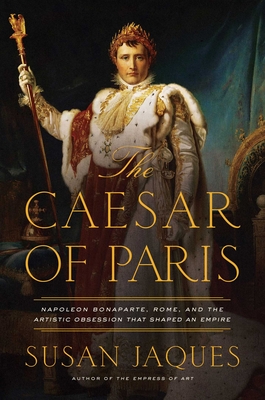 The Caesar of Paris: Napoleon Bonaparte, Rome, and the Artistic Obsession that Shaped an Empire (Hardcover)

Out of Print
A monumental cultural history of Napoleon Bonaparte’s fascination with antiquity and how it shaped Paris’ artistic landscape.

Napoleon is one of history’s most fascinating figures. But his complex relationship with Rome—both with antiquity and his contemporary conflicts with the Pope and Holy See—have undergone little examination.

In The Caesar of Paris, Susan Jaques reveals how Napoleon’s dueling fascination and rivalry informed his effort to turn Paris into “the new Rome”— Europe’s cultural capital—through architectural and artistic commissions around the city. His initiatives and his aggressive pursuit of antiquities and classical treasures from Italy gave Paris much of the classical beauty we know and adore today.

Napoleon had a tradition of appropriating from past military greats to legitimize his regime—Alexander the Great during his invasion of Egypt, Charlemagne during his coronation as emperor, even Frederick the Great when he occupied Berlin. But it was ancient Rome and the Caesars that held the most artistic and political influence and would remain his lodestars. Whether it was the Arc de Triopmhe, the Venus de Medici in the Louvre, or the gorgeous works of Antonio Canova, Susan Jaques brings Napoleon to life as never before.
Susan Jaques is a journalist specializing in art. She holds a Bachelor of Arts degree in history from Stanford University and an MBA from UCLA. She is the author of A Love for the Beautiful: Discovering America's Hidden Art Museums and lives in Los Angeles, California, where she's a gallery docent at the J. Paul Getty Museum.
"The Caesar of Paris by Susan Jaques is a fascinating cultural history of Napoleon’s relationship with antiquity—and how it shaped Paris’s artistic landscape."
— Andrew Roberts, New York Times bestselling author of Churchill: Walking With Destiny

"Susan Jaques sweeps through the artistic history of Napoleonic Europe with the verve, enthusiasm, and exuberance the subject deserves. She brings to it her deep erudition, together with the sense of wonder—sometimes awe-struck, sometimes appalled—that Napoleon’s vast, often vainglorious cultural ambitions require. Jaques adds to this a profound grasp of the Roman influences on the age. Simply stirring."
— Michael Broers, author of Napoleon: Soldier of Destiny

"An excellent history. Jaques’s rich work of scholarship will delight lovers of art and Napoleon aficionados, as it sheds much new light on a previously underexplored dimension of the French emperor."
— Publishers Weekly

"A massively ambitious compilation of history and stuff that will appeal to students of Napoleon and art history buffs. "
— Kirkus Reviews