Victoria the Queen: An Intimate Biography of the Woman Who Ruled an Empire (Compact Disc) 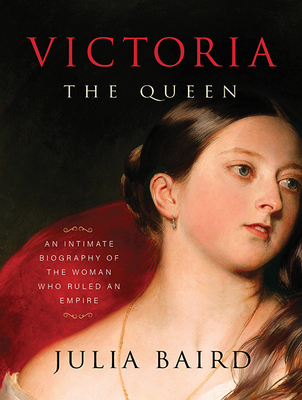 Victoria the Queen: An Intimate Biography of the Woman Who Ruled an Empire (Compact Disc)

“Only 18 when she assumed the throne, Victoria ruled a vast empire for more than 60 years. In this biography Baird reveals a woman who so dominated the world that an entire epoch was named for her. Her nine children and their children inhabited most of the thrones of Europe until the upheaval of World War I, and her expansionist policies enabled Great Britain to rule over a quarter of the entire world. Baird also portrays a passionate and vibrant woman who struggled to assert herself in a time and place that was dismissive of the female sex. This enthralling biography is a welcome addition and nuanced look at a dynamic queen.”
— Barbara Hoagland (E), The King's English, Salt Lake City, UT

When Victoria was born, in 1819, the world was a very different place. Revolution would threaten many of Europe's monarchies in the coming decades. In Britain, a generation of royals had indulged their whims at the public's expense, and republican sentiment was growing. The Industrial Revolution was transforming the landscape, and the British Empire was commanding ever larger tracts of the globe. In a world where women were often powerless, during a century roiling with change, Victoria went on to rule the most powerful country on earth with a decisive hand. Fifth in line to the throne at the time of her birth, Victoria was an ordinary woman thrust into an extraordinary role. As a girl, she defied her mother's meddling and an adviser's bullying, forging an iron will of her own. As a teenage queen, she eagerly grasped the crown and relished the freedom it brought her. She was outspoken with her ministers, overstepping conventional boundaries and asserting her opinions. And as science, technology, and democracy were dramatically reshaping the world, Victoria was a symbol of steadfastness and security-queen of a quarter of the world's population at the height of the British Empire's reach.
Julia Baird is a journalist, broadcaster, and author based in Sydney, Australia. Her writing has appeared in "Newsweek," the "New York Times," the "Philadelphia Inquirer," the "Guardian," the "Good Weekend," the "Sydney Morning Herald," the "Sun-Herald," the" Monthly," and "Harper s Bazaar.""