The Great Shelby Holmes and the Coldest Case (Paperback) 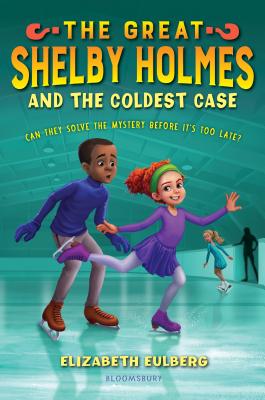 By Elizabeth Eulberg
$8.99
On Our Shelves Now

Being friends with a super sleuth isn't easy, especially when she's nine years old, four feet tall, and full of attitude. But for eleven-year-old John Watson, being friends with Shelby Holmes is just the adventure he's looking for.

After Watson's online journal chronicling his and Shelby's case-closing abilities attracts the attention of a newspaper reporter, the pair becomes a small "media sensation" in their Harlem neighborhood. So it's no surprise (at least, to Shelby!) when the article lands them a new client--a figure skating coach whose star athlete, Jordan Nelson, is receiving strange, threatening messages, written entirely in code.

There's no one better to crack the cipher than dynamic duo Shelby and Watson! But to gather information, Shelby decides that they'll have to go undercover . . . as an award-winning pair skating team. Can they use the laws of physics and their acting skills to maintain their covers and figure out who's sending Jordan such strange messages before it's too late?

“Eulberg does an excellent job of character development and presenting realistic family and friend relationships . . . Another fantastic addition to the series.” —School Library Journal on THE GREAT SHELBY HOLMES MEETS HER MATCH

“Mystery lovers will enjoy these characters as much as the case they're working to solve.” —Booklist on THE GREAT SHELBY HOLMES MEETS HER MATCH

“A smart, fresh take on an old favorite makes for a terrific series kickoff.” —Kirkus Reviews on THE GREAT SHELBY HOLMES

“A lively present-day update of Sherlock Holmes, one with plenty of winks to the source material.” —Publishers Weekly on THE GREAT SHELBY HOLMES

“This smart, funny mystery brings all the charm of the classic Holmes and Watson stories to a fresh, contemporary setting.” —Varian Johnson, author of THE GREAT GREENE HEIST and TO CATCH A CHEAT, on THE GREAT SHELBY HOLMES

“Fun, fresh and unputdownable.” —Sarah Mlynowski, NEW YORK TIMES bestselling author of the Whatever After series, on THE GREAT SHELBY HOLMES

“Young Shelby . . . is no less dogged a detective than Sherlock himself. [Readers] will be moved by the friendship at the heart of this riveting mystery.” —Pseudonymous Bosch, NEW YORK TIMES bestselling author of The Secret Series and Bad Books series, on THE GREAT SHELBY HOLMES

“Mystery fans may try to solve the case, but most, like John, will enjoy just hanging out with Shelby to see what happens next.” —Booklist on THE GREAT SHELBY HOLMES