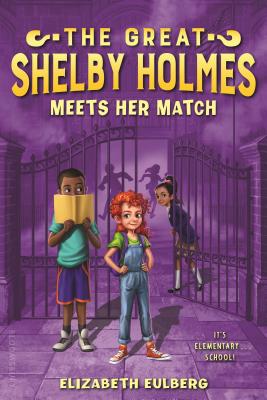 By Elizabeth Eulberg
$7.99
On Our Shelves Now

Acclaimed author Elizabeth Eulberg continues her hilarious middle-grade twist on Sherlock Holmes as detective duo Shelby and Watson face a culprit who might be able to do the impossible--outsmart Shelby.

Eleven-year-old John Watson never expected his first friend in his new Harlem neighborhood to be Shelby Holmes, a nine-year-old, four-foot-tall supersleuth whose incredible smarts are outweighed only by her big attitude. But it turns out that solving mysteries with Shelby is just the adventure that aspiring writer John needs.

On John's very first day of school in New York, Shelby deduces that their new science teacher, Mr. Crosby, is in trouble. But as Shelby and John dig deeper to expose the truth, they discover there might be someone unexpected involved . . . Someone determined to outsmart Shelby Holmes. Can Shelby and John uncover the truth before the case goes from puzzling to downright dangerous?

“Mystery lovers will enjoy these characters as much as the case they're working to solve.” —Booklist

“Eulberg does an excellent job of character development and presenting realistic family and friend relationships . . . Another fantastic addition to the series which will have readers anxiously awaiting Holmes and Watson's next adventure.” —School Library Journal

“Mystery fans may try to solve the case, but most, like John, will enjoy just hanging out with Shelby to see what happens next.” —Booklist on THE GREAT SHELBY HOLMES

“Brisk pacing, likable characters, a few silly Holmes jokes. . . and a diverse neighborhood, carefully and realistically described by John, are ingredients for success. A smart, fresh take on an old favorite makes for a terrific series kickoff.” —Kirkus Reviews on THE GREAT SHELBY HOLMES

“A lively present-day update of Sherlock Holmes, one with plenty of winks to the source material. Readers will delight in Shelby's ability to read clues in this well-plotted mystery and sympathize with Watson who, along with the rest of the supporting cast, is generally two steps behind Shelby.” —Publishers Weekly on THE GREAT SHELBY HOLMES

“Will delight readers as they attempt to solve the mystery of a missing dog. Eulberg's middle grade debut is a first purchase for mystery lovers.” —School Library Journal on THE GREAT SHELBY HOLMES