The Loneliest Band in France: A Novella (Paperback) 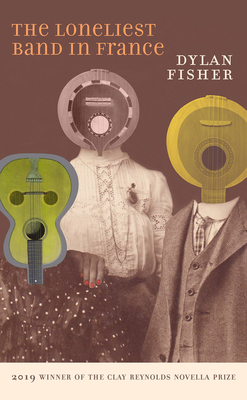 The Loneliest Band in France: A Novella (Paperback)

Mistaking an ad to join the titular The Loneliest Band in France for one to sell his blood, Migara de Silva, the novella’s narrator — a Sri Lankan student, new to Montpellier — finds himself, instead, under the sway of the band, drinking heavily and being recruited to play a battle-of-the-bands-esque concert (that night) at the local Café Bovary with its four members: Noël, Guy, Lucien, and Michel. Not only is there prize money attached to the concert, the bandmates also see this as an opportunity to debut a new song, one, they claim, that can hurt — even kill — its listeners.

DYLAN FISHER is currently an MFA candidate in Creative Writing at the University of Nevada, Las Vegas. The Loneliest Band in France is his first book.

“Dylan Fisher’s The Loneliest Band in France is a feverish, terrifying gem of a novella. The existential doom of an earth careening into chaos pervades these pages, though it is filtered through the endearing, funny voice of a bewildered Sri Lankan law student abroad in France, whose simple quest for knowledge is interrupted by a homicidal rock band, overbearing host parents, and the desolate desire to feel something in a world that has stopped making sense. In fact, if Bolaño and Camus had teamed up in a parallel universe to write the liner notes of a lost Talking Heads album, they might produce a brilliant, wild work much like this one.”
—Dean Bakopoulos

“The Loneliest Band in France is seductive, propulsive, and drunk with narrative energy. Reading the first page of the book felt like stepping off a cliff, where the fall to the end of the novel was fast and dazzling—murderous vegan metal bands, and disappointed fathers, and Parisian streets, and Sri Lankan childhood memories, and music that kills all who hear it, coming quickly in and out of view until—smack—I, the reader, am on a French beach at the end of the novel, covered in sand, crying with the narrator and his father, wondering how they, how any of us, ever survive long enough to get a glimpse of who we are.”
—Rita Bullwinkel

“Far from home, alienated from his father, the narrator of Dylan Fisher’s The Loneliest Band in France accepts a dream-like, deceptively easy offer from strangers. In much the same way, Fisher’s smooth, hypnotizing prose leads the reader deeper and deeper into a seemingly straightforward and yet utterly disorienting world of unspoken truth and invisible threat."
—Maile Chapman