Ketanji Brown Jackson: A Justice for All (Hardcover) 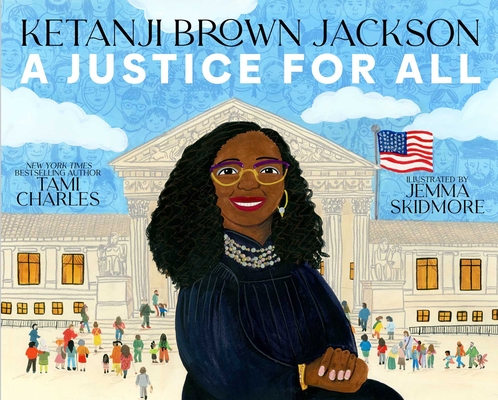 Ketanji Brown Jackson: A Justice for All (Hardcover)


Coming Soon - Available for Pre-Order Now
Discover the incredible story of Justice Ketanji Brown Jackson, who followed her childhood dream of becoming a lawyer and eventually became the first Black woman to sit on the US Supreme Court in this picture book biography.

After 232 years and 115 appointments, Ketanji Onyika Brown Jackson became the first Black woman appointed to serve on the US Supreme Court. With Tami Charles’s sweeping lyricism and Jemma Skidmore’s unforgettable illustrations, readers learn about the narratives that have shaped the Justice’s life, and how this historic moment will be impressed upon the minds of the young dreamers of the future.
Tami Charles is the New York Times bestselling author of All Because You Matter and numerous books for children and young adults. Her middle grade debut, Like Vanessa, earned three starred reviews and a Junior Library Guild selection. Her latest titles include young adult novel in verse, Muted, which was a BuzzFeed Top 40 pick for 2021; lyrical picture book We Are Here; and a picture book biography about Justice Ketanji Brown Jackson. When Tami isn’t writing, she can be found presenting at schools both stateside and abroad. For more info, you can follow Tami on Twitter @TamiWritesStuff or Instagram @TamiWrites.

Jemma Skidmore is a dyslexic, mixed-race illustrator who grew up in rural Gloucestershire, United Kingdom. Although she wasn’t a confident early reader, she has always been fascinated by the art of storytelling. Jemma studied fine art at Falmouth University and has gone on to work in print, film, and television in London and Vancouver, British Columbia. She has now returned to Gloucestershire, where she lives with her family and a cat named Blue.