NON-TRUTH, MORAL NIHILISM, and JACOBIN CYNICISM: Western Civilization's Descent as Reflected in the Tenures of the 44th and 45th US Presidents, and th (Hardcover) 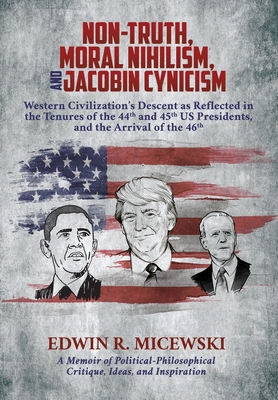 NON-TRUTH, MORAL NIHILISM, and JACOBIN CYNICISM: Western Civilization's Descent as Reflected in the Tenures of the 44th and 45th US Presidents, and th (Hardcover)


Available to Order - Usually Arrives in Our Store in 4 to 7 Days
America, the powerful lead nation of the occidental world, is in trouble. Her society is deeply divided as moral and intellectual confusion sweep across the country, engulfing politics, media, academia, and the arts. Micewski confirms this premise in his compelling analysis of the tenures of the 44th and 45th US Presidents-two political leaders diametrically opposed in character, ideology, and statecraft-as well as the transition to the 46th and his first year in office. He thrusts his critique equally at social and cultural issues as well as foreign policy and national security challenges that arose during these twelve-plus years in contemporary American history. From the fundamental level of political and moral philosophy, the author challenges the dictate of scientific rationality as the exclusive model of dealing with social and political challenges and calls for a revival of a comprehensive framework of meaning that restrengthens the metaphysical and spiritual dimensions of human consciousness. In analyzing the impact of the political administration's decisions and policies on the nation and global affairs, he explains why human coexistence, at all levels, requires the acknowledgment of a minimal moral disposition, a nominal level of shared morality, and human recognition. Micewski's thought-provoking memoir reveals the tragic consequences the lack of philosophical wisdom in the polity generates on both national and international levels. His critical review offers solutions and ideas for resolve and explains why a rebirth of thoughtful conservatism is essential for this nation's and Western civilization's survival. Edwin R. Micewski is a retired Austrian Brigadier General with a Doctorate in Philosophy and a Master's in Political Science from the University of Vienna. He was the director of a humanities and social sciences center and has published and taught on both sides of the Atlantic about national security, military ethics, and civil-military interactions. Since his retirement in 2008, he has lived in the United States, where he continues to write and comment as a freelance philosopher and political blogger.