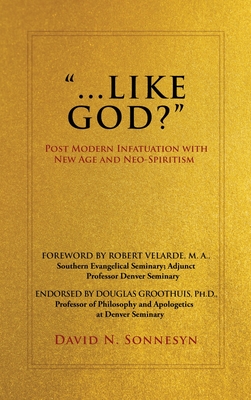 
Available to Order - Usually Arrives in Our Store in 4 to 7 Days
Genesis 3:5 - "For God knows that when you eat of it, your eyes will be opened, and you will be like God knowing good and evil." Thus Satan planted pride and doubt in the minds of Eve and Adam and man's rebellion began. "...LIKE GOD?" describes Postmodern Infatuation with New Age, Neo-Spiritism, "Progressive" Christianity, and Critical Theory from historical, psychological, and theological perspectives. Americans are living in confusing and dangerous times. New Age thought is now the mindset of the average American. The evidence is everywhere that the "Cancel Culture" has rejected Judeo-Christian ethics. Common sense is lost and topsyturvyism reigns. False prophets and doctrines are elevated to "woke" status. The Bible is mocked and fewer Christians actually study it carefully. Biblical truth is obscured by a cloud of mysticism, doubt, and speculation. "In this thorough and well-researched work, David Sonnesyn brings a lawyer's mind to the task of exposing and challenging the leading false worldviews of our day. He leaves no heresy unexposed and exposes all of them to the liberating truth of Christianity." Douglas Groothuis, Ph.D., Professor of Philosophy and Apologetics at Denver Seminary, author of Christian Apologetics: A Comprehensive Case for Biblical Faith; Walking Through Twilight: A Wife's Illness - A Philosopher's Lament; Philosophy in Seven Sentences; and twelve other books. Dave has a Juris Doctorate from the University of Colorado and has practiced law in Longmont, Colorado, for 56 years. A sinner saved by grace, for 28 years he has taught and led seminars on Christian Apologetics including New Age, Neo-Spiritism, Critical Theory, and Reasons to Believe. Dave and his wife, Deana, are blessed to have 6 children and 13 grandchildren.