A Take-Charge Girl Blazes a Trail to Congress: The Story of Jeannette Rankin (Hardcover) 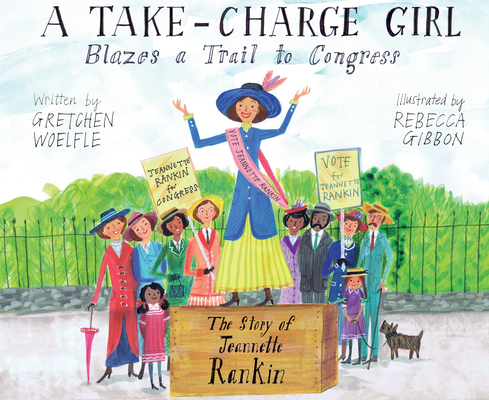 A Take-Charge Girl Blazes a Trail to Congress: The Story of Jeannette Rankin (Hardcover)


Coming Soon - Available for Pre-Order Now
For take-charge girls in the making and fans of I Dissent and Kamala Harris: Rooted in Justice, this is the story of Jeannette Rankin, the first US congresswoman.

Jeannette Rankin was always a take-charge girl. Whether taking care of horses or her little brothers and sisters—Jeannette knew what to do and got the job done. That’s why, when she saw poor children living in bad conditions in San Francisco, she knew she had to take charge and change things.

But in the early twentieth century, women like Jeannette couldn’t vote to change the laws that failed to protect children. Jeannette became an activist and led the charge, campaigning for women’s right to vote. And when her home state, Montana, gave women that right, Jeannette ran for Congress and became America’s first congressWOMAN!
Gretchen Woelfle is the author of multiple award-winning fiction and nonfiction books for young readers, including Write On, Mercy!, Mumbet's Declaration of Independence, and Answering the Cry for Freedom.

Rebecca Gibbon is a graduate of the Cardiff School of Art & Design, the Liverpool School of Art, and the Royal College of Art. She is the illustrator of many books for children including Marjory Saves the Everglades and Nellie vs. Elizabeth.