History of Taiwan: A Captivating Guide to Taiwanese History and the Relationship with the People's Republic of China (Hardcover) 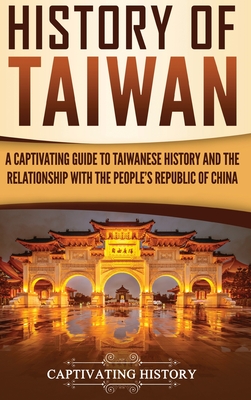 History of Taiwan: A Captivating Guide to Taiwanese History and the Relationship with the People's Republic of China (Hardcover)

If you want to discover the captivating history of Taiwan, then keep reading...

The history of Taiwan is astonishing. Politically, Taiwan-- was a warlord culture. The Portuguese, when passing by the island in the mid-1540s, called the island "Ilha Formosa," which means "Beautiful Island."

Then the Dutch came in the 1620s, searching for a base of operations for the Dutch East India Company.

Then the Han Chinese came in the 17th century. Many of these Han Chinese were refugees from the wars in China. This influx caused an explosive reaction.

And then came the Japanese in 1894 Taiwan was subjugated to a Japanese program of inculcation. All the people of Taiwan had to learn Japanese, and Shinto shrines cropped up everywhere.

Then came Chiang Kai-shek in 1949. He awakened the conflict between the vestiges of Japanese influences and the Republic of China.

Having been inflicted with so many cultural and political invasions, a new breed of Taiwanese people rose up, and they wanted freedom from the oppression they had faced for decades, although there were some who wanted socialism and communism. Taiwan is not even recognized as an independent sovereign by every country in the world today.

Read Taiwan's story--a story of an island that walks a tightrope searching for its identity, balance, and fate.

In History of Taiwan: A Captivating Guide to Taiwanese History and the Relationship with the People's Republic of China, you will discover topics such as

So if you want to learn more about the history of Taiwan, scroll up and click the "add to cart" button