Cardboardia 2: This Side Up (Hardcover) 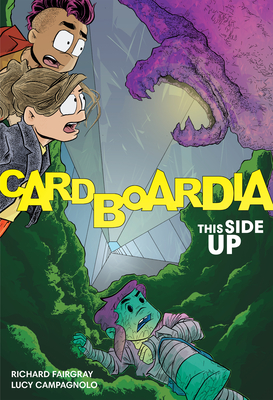 Cardboardia 2: This Side Up (Hardcover)

This is book number 2 in the Cardboardia series.

A war for the very fate of the cardboard kingdom smolders and could ignite at any moment in the second book in the Cardboardia graphic novel series, perfect for fans of Furthermore and Nightlights.

Pokey is lost in Cardboardia, and her older brother, Mac, and friends, Maisey and Bird, are desperately trying to find her. Taken in by a band of wild witch girls—friends or foes?—Mac, Maisey, and Bird learn more about how the world off Cardboarida works. What’s in all the boxes? What are the rules of travel?

They also learn that there are a few humans in Cardboardia, like an old man named Warwick, who teaches Bird how to manipulate paper pulp who also tells them the rulers of Cardboardia want to end it.

Then a posse is sent for the kids by the Gray King, and a full-on battle ensues: Maisey, Mac, Bird, Warwick, and the witches vs: the Gray King’s coal monsters, who threaten to burn down everything. The stakes just got a whole lot higher. . . .

Richard Fairgray is a New Zealand-born, award-winning, author illustrator of comics and picture books. He draws, colors, and animates his work, in spite of being legally blind. He has published over two hundrer comics, including the New Zealand bestselling Blastosaurus, graphic novel series Black Sand Beach, and his picture books, which are recognized world-wide.

Originally from New Zealand and now based in London, Lucy Campagnolo has a background in film, working on every aspect from production through to the art department. Lucy’s keen understanding of visual narratives brings a depth to the world building in Cardboardia, her first comic title. Lucy loves to explore the world, meeting new people, gaining new experiences and playing with new dogs. Her current goal is to obtain her own crumbling castle, be it through luck, sorcery, or by simply overthrowing a king.