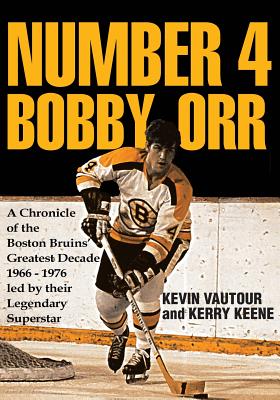 By Kevin Vautour, Kerry Keene
$27.95
Available to Order - Usually Arrives in Our Store in 4 to 7 Days

Bursting upon the National Hockey League scene in the fall of 1966 amid enormous hype and expectations, Robert Gordon "Bobby" Orr would go on to exceed all predictions of greatness. Displaying All-Star level ability from the start, it was his talent as a play maker and scorer that utterly revolutionized the game of hockey. At the same time, Orr helped revive a tired, long-suffering Boston Bruins team, leading them to their first Stanley Cup in twenty-nine years at the age of twenty-two. Orr and company would drink from the Cup again two years later as he continued to cement his legacy with MVP Awards and Norris Trophies. The unforgettable sight of him rushing the puck up ice with blond hair flying was a thing of sheer athletic beauty. But Orr's fragile knees plagued him throughout his career, ultimately forcing him to retire before the age of thirty. But in his ten years with the Bruins, the remarkable body of work and the greatness he achieved prompt many hockey historians to regard him as the all-around greatest, most skillful player in history. Number 4: Bobby Orr is the most ambitious in-depth look at Orr and the Bruins' greatest decade.