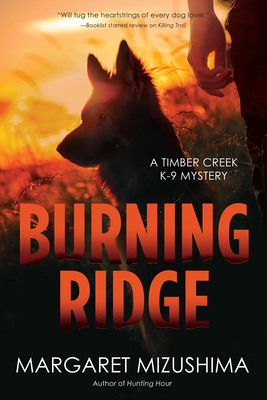 This is book number 4 in the A Timber Creek K-9 Mystery series.

Featuring Mattie Cobb and her police dog partner, Robo, this fourth installment in the critically acclaimed Timber Creek K-9 series is just the treat for animal lovers and fans of Alex Kava.

On a rugged Colorado mountain ridge, Mattie Cobb and her police dog partner, Robo, make a grisly discovery—and become the targets of a ruthless killer.

Colorado’s Redstone Ridge is a place of extraordinary beauty, but this rugged mountain wilderness harbors a horrifying secret. When a charred body is discovered in a shallow grave on the ridge, officer Mattie Cobb and her K-9 partner Robo are called in to spearhead the investigation. But this is no ordinary crime—and it soon becomes clear that Mattie has a close personal connection to the dead man.

Joined by local veterinarian Cole Walker, the pair scours the mountaintop for evidence and makes another gruesome discovery: the skeletonized remains of two adults and a child. And then, the unthinkable happens. Could Mattie become the next victim in the murderer’s deadly game?

A deranged killer torments Mattie with a litany of dark secrets that call into question her very identity. As a towering blaze races across the ridge, Cole and Robo search desperately for her—but time is running out.
Margaret Mizushima is the author of the critically acclaimed Timber Creek K-9 mysteries. Her first novel, Killing Trail, was named Debut Mystery of the Month by Library Journal and was an RT Reviewers’ Choice Award nominee. She balances writing with assisting her husband with their veterinary clinic and Angus cattle herd. They live on a small ranch in Colorado where they raised two daughters and a multitude of animals. This is her fourth mystery.

“Mizushima boldly emphasizes her heroine’s history, connecting Mattie’s past with her current case and forcing Mattie to take a leap and share her story with colleagues and friends in order to catch the killer. The development of an extensive backstory over a multibook arch pays off.”
—Kirkus Reviews

“An intense mystery that emphasizes the abilities of Robo and his partnership with Mattie. Combining a police procedural with Mattie’s personal story creates an anxiety-inducing novel that will remind readers of Nevada Barr’s books.”
—Library Journal

“The Mattie-Robo pairing makes these stories appealing to both mystery lovers and animal lovers. This volume tightens the screws on them, showing more of their strengths and vulnerabilities.”
—Reviewing the Evidence

“Books like Burning Ridge make me appreciate the series format so much, because . . . characters become so real, they feel like friends. Mizushima’s sleight of hand as a genre writer (she’s particularly adept at red herrings) only makes this fine series that much more enjoyable. I’m very much looking forward to my next encounter with Mattie Cobb.”
—Mystery Scene